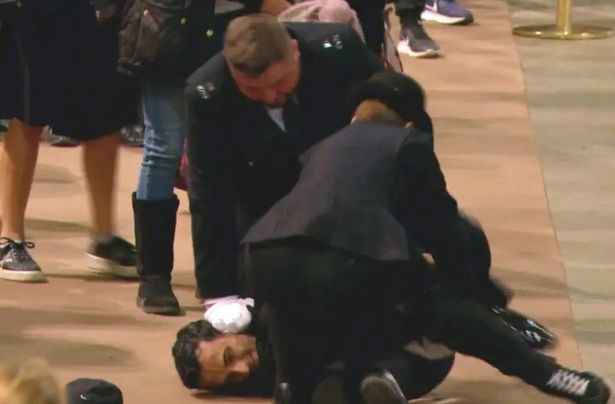 A man sparked chaos after rushing from the queue and grabbing the Queen’s coffin as it was lying in state.

Police leapt on the man and dragged him away from the monarch’s casket within seconds of him barging through the crowd to touch it.

He attempted to pull the royal standard flag off Her Majesty’s coffin in the disturbing episode, which saw him arrested.

Mourners watched open-mouthed as the man was restrained by police before being carried out of Westminster Hall.

A Met Police spokesman said: “At 10pm on Friday 16 September officers from the Met’s Parliamentary and Diplomatic Protection Command detained a man in Westminster Hall following a disturbance.

‘He was arrested for an offence under the Public Order Act and is currently in custody.”

A witness told MailOnline : “We saw him (the man) in the queue from the beginning of the queue and throughout the day, he was by himself.

‘When we entered the room we were at the top of the stairs when we saw the incident. A lady screamed as it happened it was quite unnerving. Although he was detained and people kept calm and carried on.”

The Department for Digital, Culture, Media and Sport (DCMS) has now confirmed entry to the queue to see the Queen has been paused for “at least” six hours.

Officials earlier stopped people from entering the queue, causing a crowd to form around the entrance as people begged to be let in.

In an update shared at 1.15am on Saturday, the DCMS said: “The queue is near total capacity with a wait time of at least 25 hours. Please do not travel to join the queue. Check back for updates in the morning.”

The DCMS said on Friday that access to the queue would resume at midday on Saturday.