What will be buried with the Queen and her coffin 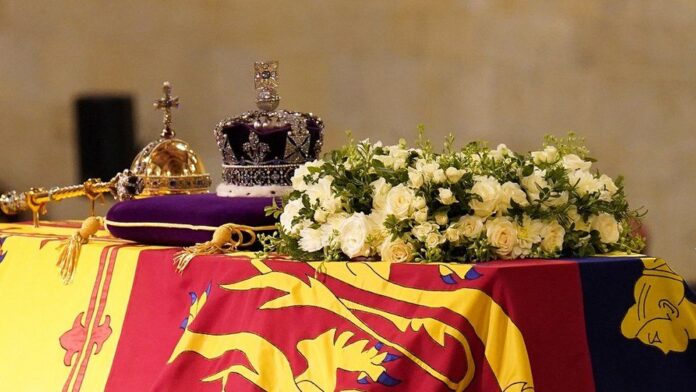 The Queen’s coffin lies-in-state in Westminster Hall with the Imperial State Crown, Royal Standard and floral wreath on top

The Queen Elizabeth II funeral has commenced with a lie in state at Westminster Abbey as mourners seated for the state burial.

The Queen will eventually be reunited with her parents, sister and the late Duke of Edinburgh, her husband of nearly 74 years, in her final resting place at Windsor Castle.

A committal ceremony for the Queen will take place at St George’s Chapel following her funeral at Westminster Abbey.

Although the Queen is expected to be buried with few ceremonial items, they have been on show with her coffin as she lies in state for four days in Westminster Hall from Wednesday until her funeral today (Monday).

The Imperial State Crown has been placed on the Queen’s coffin on top of the Royal Standard flag, along with a white floral wreath which featured white roses, white dahlias and foliage, including pine from the gardens at Balmoral and pittosporum, lavender and rosemary from the gardens at Windsor.

The mortal remains of Queen Elizabeth II lie in her coffin under 24-hour guard in Westminster Hall so that the public can pay tribute to her until the funeral today.

The coffin was draped with the Royal Standard, a flag representing the four kingdoms of the UK which is also the flag used at royal residences to represent when the sovereign is home.

The Imperial State Crown is, whether you realise it or not, one of the Queen’s most-worn crowns, worn every year for the state opening of parliament, as well as the crown worn by Her Majesty at the end of her coronation.

It’s solid gold frame, with 2,868 diamonds, 269 pearls, 17 sapphires, 11 emeralds, and four rubies, was originally created for the coronation of the Queen’s father, King George VI, and was reshaped for the Queen and its height reduced to “make it appear more feminine”.

The Sovereign’s orb and scepter, made of hollow gold and with more than 600 precious stones, will also be placed on the coffin for the funeral ceremony.

What will be buried with the Queen?

Traditionally, members of the Royal Family are buried with items close to them, including jewellery and mementos.

Prince Philip was buried with his military effects, notably his naval office cap and his sword which were placed on top of his coffin during the procession to St George’s Chapel at Windsor Castle.

Queen Victoria passed away at the incredible age of 81 in January, 1901. Famously in mourning since the death of her husband Prince Albert, Victoria was buried in black clothing, with her and her husband’s wedding rings.

Also included in Victoria’s coffin was one of Albert’s dressing gowns and an elaborate cape made by her daughter Princess Alice, who passed away from diphtheria in 1878, for her husband.

Ever the rebel, Princess Margaret broke with tradition and chose to be cremated so that her ashes could be scattered next to her father, King George IV.