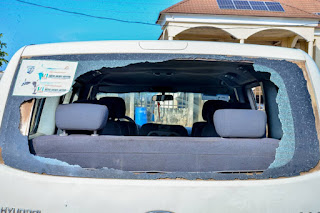 Prince Akeem Adeyemi popularly known as Skimeh escaped what could have been a doom of death in Ibadan.

The attack on the peace living people of Oyo Alaafin in Ibadan remains a thing that have continued to baffle the people of Oyo because there was no justification for the unprovoked attack on the convoy. This many political pundits are saying are bad signs of times to come in Oyo State where thugs loyal to the incumbent government are going about unleashing mayhem on the people of the state.

The House of Representatives Member and also son of the departed Alaafin of Oyo, Prince Akeem Adeniyi Adeyemi escaped unhurt with several others wounded and their buses windshields were shattered and the buses vandalized as the entourage was attacked by Governor Makinde’s Park Manager boys comprising of dozens of thugs led by Mukaila Lamidi aka Auxillary in Ibadan on their return from Ife in Osun state for a family junction, according to eye witnesses.

The occupants of the buses said “they were in Ibadan already. The bus they were traveling with had just got to Jeje Petroleum Station  when they saw people coming towards their direction. They were shouting ‘thief thief thief, get them, wound them, kill them…’.   Their drivers tried their best before some of their people scampered for safety. Some of their people got injured in the process as the windscreens of some of their buses were vandalized in the process using shovel and Digger to break the windows. Alhaji Mukaila Auxiliary was sighted in the vicinity enjoying himself and his boys was doing the mayhem.

They were all grateful to God that no life was lost. The Honorable representing Oyo Federal constituency at the national assembly confirmed the unprovoked attack as he thanked God that no life of the people he traveled with was lost and the wounded are in the hospital receiving treatment. We shall give you updates if there are any arrests by the Commissioner of Police in Oyo State