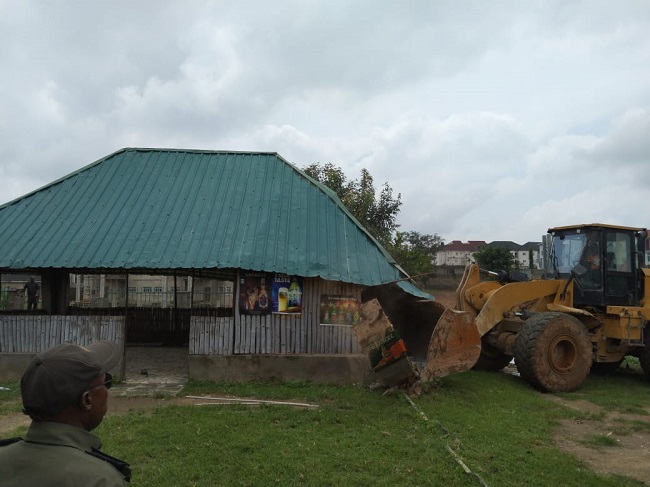 Spotlight Garden Events and Recreation Centre, located in the Wuye District of Abuja was demolished by the Federal Capital Territory Administration on Monday.

The administration, revoking an allocation of the garden, noted that its action was in accordance with its guideline for park operators not to operate beyond 07:00pm.

The FCTA alleged that the owner and allottee of the demolished garden had received multiple notifications for repeatedly breaking the park operation rules, our correspondent gathered.

In a statement on Monday, the coordinator of the Abuja Metropolitan Management Council, Umar Shuaibu, alleged that thugs invaded the garden last week and killed a security officer.

He noted that the FCTA was enforcing the 07:00pm closing time for parks and gardens due to the peculiar security situation in the country’s capital city, adding that both the allottee and the operator of the garden would be prosecuted for the violation of the regulations leading to the attack and killing of the security officer.

He said, “Just last week at a park, called Spotlight Garden Events and Recreation in Wuye District, the operator flagrantly violated our closing time regulation by operating beyond 7pm. This attracted the activities of armed hoodlums who gunned down a gallant security officer in cold blood. This could have been avoided if they had complied with our regulations.

“The park allottee and the operator will, henceforth, be prosecuted for the violation of the regulations and for creating the enabling environment that led to the death of an innocent citizen. Already, the park operator has been arrested.

“Hence, this allocation stands revoked and the site will be demolished and recovered by the Administration immediately. This should serve as a warning to all park allottees and operators who deem it fit to arrogantly violate the laid down rules and regulations.”