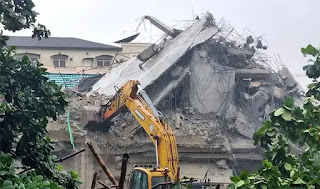 Death toll from the collapsed building at Oba-Oniru Street, near Sand Field area of Victoria Island, Lagos, is now six.

He said the sixth body was recovered at about 2.33p.m.

Recall that the seven-storey building collapsed at about 3a.m., on Sunday and two bodies were recovered before noon.

Three additional bodies were recovered earlier on Monday, while the fourth was recovered at about 2.33p.m., which brought the death toll to six.

Osanyintolu said: “The Agency alongside other first responders has been working for over 24 hours at the site seven-storey building which collapsed yesterday.

“Another four bodies have been extricated from the rubble, bringing the fatalities to six

“The painstaking process is ongoing.

Meanwhile, the Oniru chieftaincy family has commiserated with the families of the yet-to-be identified victims.