Obi of Onitsha celebrates 20 years on throne with Ofala festival 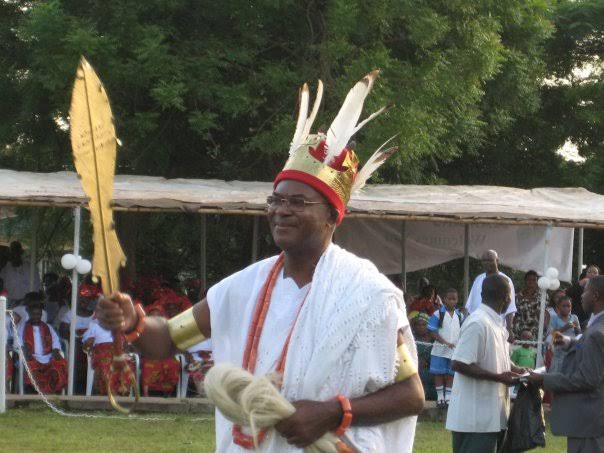 His Royal Highness, Igwe Alfred Achebe, the Obi of Onitsha, the Commercial capital of Anambra has clocked 20 years on the throne and is set to celebrate with the Ofala Festival.

Areh said the festival would be held at Ime-Obi, Onitsha on October 21 with Ofala Youth Carnival while other events would take place on October 22 and October 23 with the ‘Iru Ofala’ and ‘Azu Ofala’ respectively.

The carnival which would be organised by the Onitsha Ado Youth Council would showcase the rich cultural heritage of Onitsha.

He said the Ofala was a special celebration where the traditional ruler feasts with his subjects after his emergence from seclusion, during which period he had successfully negotiated the fortunes of the kingdom.

According to him, His Majesty, Nnaemeka Achebe, Agbogidi, Obi of Onitsha will also use the occasion of the Ofala to commemorate his 20th anniversary as monarch with thanksgiving.

“He ascended the throne of Ezechima 20 years ago on May 14, 2002, which coincidentally was his 61st birthday.

“The Ofala is the high point of the Onitsha ceremonial cycle. The Obi of Onitsha is the celebrant of this spectacle which is rooted in deep spirituality; it is an occasion for the monarch to fulfill certain obligations.

“It is also a re-enactment of the joy which the monarch shared with his subjects, at the discovery that yam is non-toxic, and a valuable source of food,” he said.

Areh said the Ofala festival was sponsored by Globacom, the telecoms giant and lucky subscribers would stand a chance to win gifts in special Ofala promo.

He said the Oraeze Arts Series; a group art exhibition promoted by His Majesty’s Chimedie Museum Trust Foundation, would also take place with no fewer than 120 artists participating.

“It is also an avenue for multi-talented and well-established artists from various parts of the world to exhibit their works; at least 120 artists will be exhibiting their works at Oreze VIII.

“A Royal banquet organised by Globacom in honour of the Obi would be held on October 26 at Dolly Hills Onitsha and there will be Ofala thanksgiving at St. Stephens Anglican Church on October 30,” he said.

Speaking on the sponsorship deal, Mike Ehunadu, Regional Manager, Globacom, Enugu Zone said the partnership with the Onitsha Traditional Council had been since 2011.

Ehumadu said the company was working towards making the festival attain the status of a major event in Nigeria, and by extension in the West African cultural/tourism calendar.

He said the Telecoms giant was pleased to associate with the Ofala and in the spirit had signed a Memorandum of Understanding with the Onitsha
“Aside from hosting the royal banquet, we will be empowering the people of Onitsha with gifts that will impact their lives.

“Lucky subscribers will have an opportunity to win two tricycles, five sewing machines and five grinding mills in our special Ofala promo,” he said.

The organisers said Ofala had been endorsed by the Nigerian Tourism Development Corporation, the apex tourism Regulatory Agency in the country as a major Nigerian Festival.