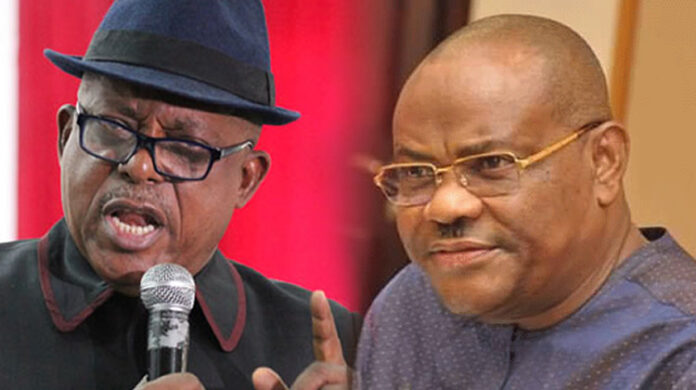 The governor said no amount of confidence votes would save Ayu from being ousted from the position.

Wike stated this at a grand reception for over 90 defectors from various political parties into the PDP at the Isaac Adaka Boro Park in Port Harcourt on Saturday.

The governor said Secondus seemed to have forgotten in a hurry that it was not the first time a sitting national chairman was removed after a vote of confidence was passed on him.

He said, “I was watching, listening. They say there is one man called Secondus. They say he was dancing, celebrating that NEC gave their person a vote of confidence. He forgets history.

“We don’t fight and go back. If you like you can have as many as 20 votes of confidence, it is not my business. My business and my team is to make sure the right thing is done.

“And the right thing must be done, whether today or tomorrow. So let nobody worry him or herself. If you are dancing, come home and dance. Come and mobilise for the person you think will win the election.”

He challenged Secondus to return home and mobilise support for the candidate he was supporting for the 2023 elections.

“You people should go home and rest. We know we are already waiting for the day set by INEC for them to blow the whistle.

“You know we have those in Rivers State and those who come from Abuja. We stay here as those of us from Rivers State Monday to Sunday. Visitors come Friday and go back on Sunday,” he added.

While welcoming the defectors, he described them as the pillars who did the underground work in their former parties, urging them to bring that energy to ensure that the PDP won all elective positions in the state.

Earlier, the State Chairman of the PDP, Amb. Desmond Akawor, said the All Progressives Congress no longer existed in the state, with the array and calibre of persons, including former commissioners, who had joined the PDP.

“Your Excellency, what you are seeing here is just symbolic through the three senatorial districts, because this stage cannot contain all of them. From the various parties, they are still coming.

“We will continue to receive the decampees (defectors) as they come through our local government chairmen,” Akawor said.

He further said the defectors had seen the light through the overwhelming performance of Governor Wike in all sectors dotting across all the 23 local government areas of the state.