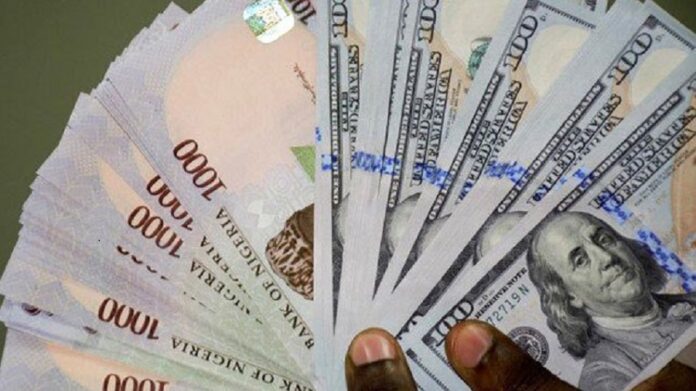 The naira has rebounded by 20.8 per cent to 720/dollar at the parallel market.

The development came two weeks after the local currency came under severe pressure at the black market, following the announcement by the Federal Government to redesign the naira.

The naira which fell consistently throughout last week against the United States dollar tumbled to an all-time low of 910/dollar last weekend.

However, the currency began a rebound against the greenback on Monday, after a week-long clampdown on foreign exchange dealers in Abuja, Lagos, Kano and other major cities by the personnel of the Economic and Financial Crimes Commission.

EFCC officials had arrested over 90 Bureau De Change operators across major cities in the country over allegations of currency hoarding and aiding politically exposed Nigerians and other criminal elements in money laundering.

The naira which was bought and sold on the streets of Lagos and Abuja between 735/dollar and 745/dollar about two weeks ago began a free fall shortly after the decision of the Federal Government to redesign the local currency.

On Monday, however, the naira rebounded and was bought and sold between 850/dollar and 860/dollar. The national currency gained significantly and steadily on Tuesday and Wednesday and closed at 720/dollar on Thursday.

Financial analysts and forex dealers who spoke to our correspondents attributed the development to market sentiment and the activities of the EFCC personnel.

The clampdown on forex dealers was said to have forced several BDCs into hiding, a move that reportedly made many politically exposed persons and currency speculators hold back in their demand for the greenback.

There had been a huge demand for the dollar at the parallel market in Lagos, Abuja and other cities.

Speaking with our correspondents on Thursday, a BDC operator at the Murtala Muhammed Airport, Lagos, Mustafa Abdullahi, noted that he bought the local currency for 715/dollar and sold it for 720/dollar.

He said several BDCs had gone into hiding following the EFCC clampdown, adding that the demand for the greenback had dropped significantly.

“Many of our people have lost hundreds of millions of naira due to the fall. Many of them bought the dollar when it was over N800. Now the US  currency has started falling and they are losing several millions. I personally lost millions of naira.”

Seriki Muhammed, another BDC operator at the Lagos airport, said he also bought the greenback for 717/dollar and sold it for 721/dollar on Tuesday.

Muhammed told our correspondent that some BDCs were licking their wounds because some had bought over $500,000 at about 820/dollar in anticipation of further loss in naira value.

“We are in a big trouble unless the dollar rises again. Many of our people bought so much dollar, hoping it would gain further,” he told one of our correspondents.

A currency dealer in Allen Avenue, Ikeja, Lagos, simply identified as Gambo Bello, said he was buying and selling the US currency for N715 and N720.

Abubakar Hamid,  a BDC operator in Abuja, told one of our correspondents that he bought the US dollar for N716 and sold it for N719.

Also, Zakari Mohammed, a BDC operator in Lagos Island, told our correspondent he was buying and selling at N718/dollar and N722/dollar.

However, the President, Association of BDC Operators of Nigeria, Aminu Gwadabe, said market sentiment and the news of the naira redesign drove the market in the past two weeks.

He said the rebound of the naira had made many currency speculators lose millions of naira.  According to him, many forex dealers did not know the naira would rebound too soon.

He said, “I can say the surveillance by the EFCC and other factors affected the market.  However, I can say that some global factors also affected the market aside from the local issues in Nigeria. Don’t forget that countries like Saudi Arabia, Russia and China are taking some steps that are currently affecting the dominance of the dollar.

“But locally, I can say certain sentiments made the naira rebound and these have led many speculators to lose millions of naira. Many took a position at N800/dollar and now they are worried the currency is now N720/dollar. This was why there was some resistance in the market today with many BDCs not willing to sell their dollar at a lower amount. People who kept the greenback are now bringing it out because of certain market sentiments.”

The Chief Executive Officer of the Centre for the Promotion of Private Enterprise, Dr Muda Yusuf, noted that there had been a decline in the rush for dollars after the announcement of the naira re-designed.

According to him, this decline might have led to the rebound of the naira.

He said, “It is a very volatile situation. The immediate reaction to that pronouncement triggered some rush to convert to dollars. That round of reaction is already beginning to die down. That’s a possible factor. Once that initial rush has subsided, it is possible that the pressure on the dollar reduced.”

He also noted that the recent rumour about some expiring dollar bills might have contributed to the rebound of the naira.

However, Yusuf noted that there were still a lot of uncertainties and the situation was still volatile.

He also said that the recent arrest of some BDC operators likely did not add to the rebound.

Yusuf further noted that there was a possibility that a number of speculators were cautious and aware of the volatile situation, which might have prevented them from any losses.

A development economist, Dr Aliyu Ilias, noted that the naira might likely still decline, especially with the coming election.

He also said that the economy had yet to be stable and the rebound might not last for long.