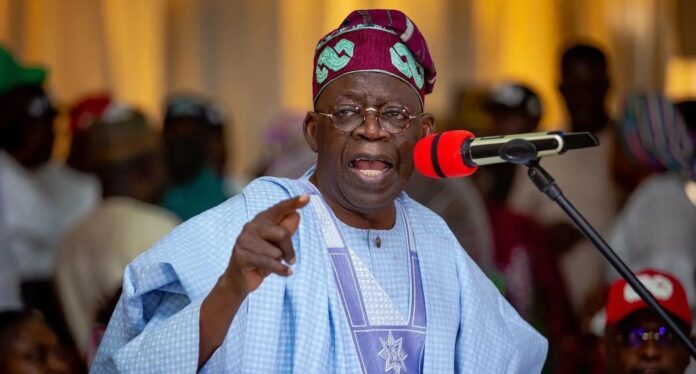 A group, Coalition Movement for Bola Ahmed Tinubu, has examined the achievements of frontline presidential candidates for the 2023 presidential election and concluded that with their (candidates) track records, Bola Tinubu deserves to become Nigeria’s next president.

The group said the All Progressives Congress flagbearer outclassed other candidates, including Atiku Abubakar and Peter Obi of the Peoples Democratic Party and Labour Party respectively in terms of achievements in political offices they previously held.

In a statement on Sunday by its Convener, Senator Rilwan Akanbi, COMBAT said the achievements of Tinubu during his stint as Lagos State governor present him as the favourite to succeed the President, Major General Muhammadu Buhari (retd.).

According to the group, what appeared to be common among the four leading contenders is the fact that they have participated and won the governorship elections in their states in the past. In addition, they have held different political positions at the federal government levels.

The statement read, “Asiwaju Bola Ahmed Tinubu stands out among the major contenders in promotion of democratic consolidation to reposition Nigeria before and during his tenure as Lagos state government. It is on record that his stand for expanding the frontier of governance through the creation of Local Government and efforts to sustain it despite opposition by the PDP government under Obasanjo-Atiku tickets makes him far better in terms of ability to restructure the country if given the mandate to lead the country. This is incomparable with Peter Obi of Labour party who refused to allow the democratic selection of local government chairmen for 8 years while in office.

“At the inception of the democratic system in 1999, it is a tradition for states to carry handout bowls to Abuja for survival until Asiwaju Bola Ahmed Tinubu introduced intervention in the areas of internal revenue generation that led Lagos State to prosperity. From internal revenue generation of six hundred million to twenty billion naira, Lagos became a template for 35 states and lately federal government for expanding the generation of revenue.

Dissecting Tinubu’s economic track records takes him ahead of other candidates for being recognized as the visionary behind the success of Lagos state economy as a prelude to transforming Nigeria’s economy. Tinubu pioneered efforts in the country with N15 billion raised through bonds is a track record none of the candidates can match. The enviable records of performance of Asiwaju Bola Ahmed Tinubu’s eight years in office as governor have sustained the states as the nation’s economic and commercial, and currently 4th largest economy in Africa.

The solution to power problems that gulp $16b and privatization under the PDP government which Atiku Abubakar as a former vice president played a prominent role remains a mirage despite the effort of the current government to clear the mess. It is a well-known fact that except for Tinubu, none of the other contenders has any past record in terms of power solutions. Under the administration of Asiwaju Bola Ahmed Tinubu, Lagos State became the first state government that generated electricity through Independent Power Project handled by the American Company, ENRON which produced 90MW and improved the electricity supply in Lagos State.

When it comes to National Infrastructure, the transformation of Lagos state with innovation that brought into existence the Lekki Free Trade Zone, the Eko Atlantic and many road projects that have helped in solidifying Lagos’s status as a mega city is enough evidence to identify Asiwaju Bola Ahmed Tinubu as a right successor to improve on achievement of current APC government in the area of New National Infrastructural Plans on the table of the Government.

“Under Asiwaju Bola Ahmed Tinubu as a governor of Lagos that stood him out among the contenders for the presidency comes 2023 include free education programme for all Lagos State public schools, including free registration for WAEC/NECO exams, bursary/scholarship allowances and upgrading of schools in the state.

“Other areas of pioneering accomplishments are budgetary allocation to the health sector from N1.6 billion in 1999 to N11.8 billion in 2006; Free malaria healthcare scheme for children and old people, reduction in HIV prevalence from 6.7% to 3.5%, Rapid Response Squad (RRS) and distribution of N150 million worth of Agricultural inputs to small and medium-scale farmers under the Lagos State Agricultural Micro-credit Scheme.

“Therefore, despite the fact that the fuss generated by the party’s primary election is yet to stop especially, with the issue of religious balancing of tickets in APC and zoning arrangement of PDP, we in COMBAT see Asiwaju ahead of all putting all these parameters and many more to bear.”