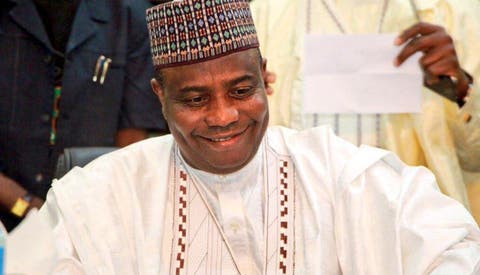 Speaking at the event the Governor said the State was grateful to President Muhammadu Buhari for approving the siting of the office in the State.

The Governor added that the gesture would boost small and medium enterprises (SMEs) in the state.

Gov. Tambuwal noted that the agency which was responsible for certification of product would promote National, Regional and international trade hence reduce over dependence on oil.

He stressed that he has confidence on the ability of the new Director General of the agency Mallam Farouk Saliu whom he described as a reputable international pharmacist to deliver on the mandate giving.

In his response, the Director General for the State Government to allocate a land for the agency to build a laboratory ,the Governor directed the commissioner of commerce to liase with the commissioner of land to aquire land opposite the office complex saying the state government will compensation of the land.

Earlier Director General /Chief Executive Officer of Standard Organization of Nigeria Mallam Farouk Saliu has restated the resolve of his agency to support Small and Medium Enterprises (SMEs) with a required standards needed to boost business.

Mallam Farouk explained that President Muhammadu Buhari had directed the agency to help diversifying the nation’s economy by boosting Small and Medium Enterprises .