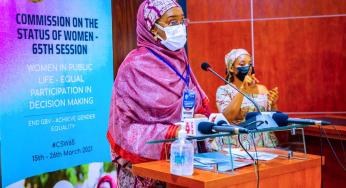 Pantami at a virtual meeting in Abuja, said that the Federal Government also commenced training of 600 youths on the deployment and installation of VSAT in the country, as part of the implementation of the policy.

He said that the UNESCO recently came up with a global policy of building capacities for citizens in VSAT installation core skills.

The VSAT is a managed satellite internet service for business and government use. It is a data transmission technology used for many types of data management and in high-frequency trading.

It can be used in place of a large physical network as it bounces the signal from satellites, instead of being transported through physical means like an internet connection.

According to the minister, beneficiaries were selected from the six geopolitical zones, which included North West Zone- Kano and Kastina, South West Zone- Ekiti and Lagos, North East Zone- Gombe and Bauchi.

Pantami said the training of VSAT core skills had begun in The Gambia and other African countries, adding that it showed the relevance of VSAT communication satellite in Africa.

“In Nigeria, we have NIGCOMSAT 1R, which is our critical infrastructure in the country.

“The Federal Government is working day in day out, to provide another back- up for the Satellite which is already on the way.

“It is a truly relevant training; the installation alone has its market and by 2025 provides about seven billion dollars.

” With the huge population in Nigeria, the earlier we realised and get ready to build the capacities for our citizens in that regards, the better for all of us,” he said.

Pantami said VSAT installation and deployment was becoming very viable and profitable in so many places like Asia, Pacific, and Latin America.

He said recently that Mexico came up with ‘Mexico Connect Door’ which provides internet access or connectivity to citizens in public places like market, universities, Airports and many other places using the VSAT installation approach.

“VSAT is key to our broadband penetration in Nigeria which is in alignment with National Digital Economy Policy strategy for a digital economy.

” It is also in line with the Nigeria Broadband plan and National innovation Entrepreneur policies,” Pantami said.

The minister, however, directed the parastatals including the ministry should ensure the soft copy of the trainings are available on the Websites, within 24hrs to encourage stakeholders to key into the policies and training of citizenry.

Speaking, Mr Yusuf Kazaure, Chairman of Board of Directors of NIGCOMSAT LTD, said Nigeria was leveraging on the digital technologies to drive government digital services.

He said the programme would optimise the communications infrastructure for National Economic Development and Digital innovation, to create value and prosperity.

“Digital Economy which aims to promote and facilitate the development of the ICT, is part of the mandates of the Federal Ministry of Communications.

“It also promotes domestic software applications and enhances digital literacy and skill, as well as National Policy on VSAT core skills for Nigerians.

“The flag-off of the policy implementation is considered paramount to our National Technological Development,” he said.

Kazaure said the launching would play a critical role in the implementation of the National Broadband Plan, as VSAT would be used to cover all the unserved and underserved rural areas in the country.

” Given the untapped nature of a lot of this capacity, a programme like VSAT training proves invaluable to most of our youths, in terms of harnessing competence and presenting them with opportunities for exposure and business acumen.

Kazaure said NIGCOMSAT would continue to anchor and promote laudable programmes of the Ministry of Communications and Digital Economy, and create an enabling environment for innovative start-ups, through innovative training.

The training is for period of five days.

There were virtual presentations of VSAT installation tools and empowerment packages to participants in Gombe, Kano and Abia.