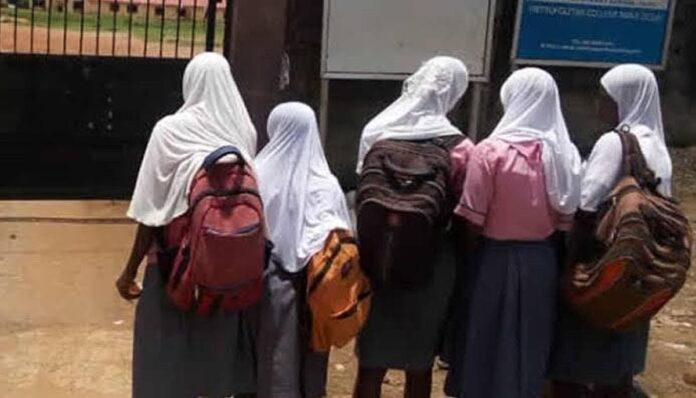 The Christian Association of Nigeria CAN on Tuesday called on the leadership of the National Assembly to suspend a bill before the House of Representatives which seeks to institutionalise the use of hijab in the country.

CAN in its response to the contentious proposed bill bill describing it as ill-timed and uncalled for.

CAN in a statement on Monday by its General Secretary, Joseph Daramola, in Abuja said “The Christian Association of Nigeria calls on the leadership of the National Assembly to suspend a bill before the House of Representatives seeking to institutionalise the use of hijab in the country. It is ill-timed and uncalled for.

“The bill titled “Religious Discrimination (Prohibition, Prevention) Bill, 2021” was seeking to provide a mechanism for enforcing certain provisions of the Constitution and other international laws that recognizes the right of a female to adorn hijab in both public and private establishments in Nigeria.

“We wonder what the sponsors of the Bill seek to gain from it other than to compound the security problem and the wearing of hijab in public and Christian schools.

“According to the 1999 Constitution (as amended), the ‘National Assembly shall have the power to make laws for the peace, order and good government of the Federation or any part thereof with respect to any matter included in the Exclusive Legislative List set out in Part 1 of the Second Schedule to this Constitution.’

“To what extent does this controversial bill seek to promote peace, order and good governance? Has dress code become part of the Exclusive Legislative List?

“While the citizens are expecting the National Assembly to make laws that will address the lopsided appointments, insecurity, unemployment and economic predicament, our lawmakers are interested in making laws that seek to promote one religion. This is totally unacceptable in a country with multiple religions.

“Honestly speaking, it is not the wearing of hijab that is our problem, it is the legislation of the wearing of it in private schools, especially of the schools whose proprietors have a different culture to that of wearing of the hijab. If anyone travels to Rome, it is common saying that he or she should do as the Romans do since he was not forced to come!

“If any Christian pupil goes to a Muslim School, he or she should abide by their practices there and vice versa. Why should a Muslim student come to a Christian school which operates under different dressing culture and insist on her own culture? That appears provocative and disrespectful!

“Legislating the wearing of hijab in private schools would lead to the trouble that those who started it may not be able to handle. Abandoning school uniform for religious dressing is going to divide the students along religious lines and further polarize our society.

“Should the children of Ifa worshippers (god of divination) wear Ifa costume to the school as well, etc? Is that not going to bring confusion? Will the wearing of the religious dress make one student brighter in class than the other? What are we legislating for?

“CAN have been consistently calling on some state governments that are enforcing the wearing of hijab in the public schools to exempt the Christian schools where hijab culture is alien.

“We are not against the wearing of hijab in public and Islamic schools but our schools should not be included unless those states are looking for trouble.

“We have resolved to close down our schools and colleges to protest against this ungodly and disrespectful policy. We should return to the status quo ante where we were before the politicisation of hijab. Let those who want to be wearing hijab go to schools where it is allowed.

“Alternatively, let those state governments return our schools and stop funding them. We are able to manage them.

“Those who took over our schools did not tell us that our religious traditions and culture would be eradicated.”

CAN urge Christians in both Federal and State legislative houses to rise and speak for the Church if they have not compromised their faith for political reasons.

“If they failed to do so, God Himself will ask them of their stewardship one day and equally fight for His Church,” the statement added.