Seriki: ‘I have lost a patriot, partner, friend’ – Tinubu 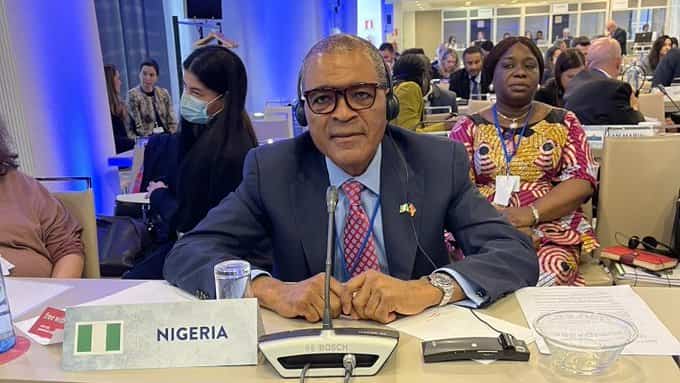 With the passing on Thursday of the Nigeria’s Ambassador to the Kingdom of Spain, HE Ademola Seriki, the All Progressives Congress Presidential Candidate, Asíwájú Bola Ahmed Tinubu, said he had lost a friend, associate and a Nigerian patriot who served the country in various capacities.

In a statement by his Media Office signed by Mr. Tunde Rahman, the former Lagos governor said:

“I’m deeply saddened and disturbed by the passing in the early hours of Thursday of Nigeria’s Ambassador to the Kingdom of Spain, H.E. Ademola Rasaq Seriki.

“A Nigerian patriot and prominent Lagosian, Ambassador Seriki was my friend, brother and close associate. He served Lagos and Nigeria in various capacities, the icing on the cake being his appointments as Minister of the Federal Republic and much later as Ambassador to Spain till his death. Indeed, Ambassador Seriki died in active service.

“He made invaluable contributions to Lagos in all spheres – economic, political, social, traditional, and religious. Popularly called Otun-Are, his traditional title in Lagos, Seriki was visible on the social scene and within the Islamic community where he was respected as a devout and knowledgeable Muslim, as he was influential in politics.

“In politics, he played important parts in the struggle for democracy and within our progressive front for which he will always be remembered. Seriki would have been on the hustings with us, but for his ambassadorial work.

“We are all deeply touched by this unexpected passing. I must, however, offer my deepest sympathy and condolences to his family, particularly his wives and children.

“I commiserate with President Muhammadu Buhari who graciously appointed him as an ambassador as a mark of honour to us in Lagos.

“I mourn with the Lagos State Governor Babajide Sanwo-olu who is from his immediate constituency.  While commiserating with his friends and associates, I also sympathise with the people of Lagos State for we have lost an eminent son of the state. May Almighty Allah grant repose of his soul and protect all that he left behind. Amin.”