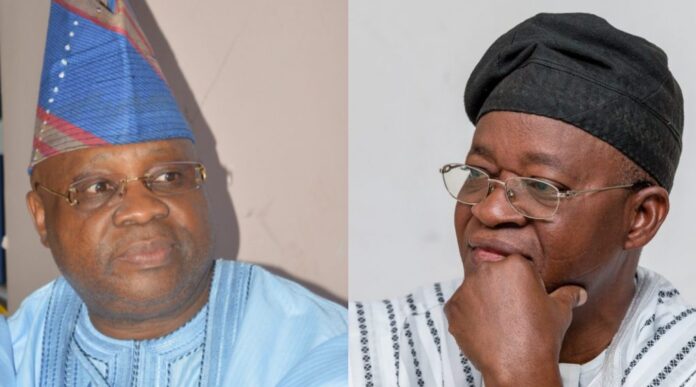 Reactions have begun to trickle in following the emergence of Senator Ademola Adeleke of the Peoples Democratic Party (PDP) as the winner of Saturday, July 16, Osun gubernatorial election in Osun State.

Nigerians have now taken to social media declaring that the victory is for youths to believe that times have changed and votes count.

Some mocked the APC and commended the Independent National Electoral Commission, INEC for ensuring a free and fair election.

@AdedayoJohn “ Imole de, When the youths are ready, you can’t stop them NeveR!

@Olokiki “ Congratulations to Adeleke, not PDP This one sweet me. We vote individuals now not parties.”

@DejiAdeyanju “ Congratulations to Adeleke again. I celebrate the good people of Osun State for standing their ground despite all the intimidation. Imole De!

@Owolabisamuel “This win is for the youths of Nigeria. Don’t allow anyone to tell you it is not possible, we spoke unanimously yesterday and it paid off! Congratulations to us all.”

@Tobijubril “The dancing Senator has finally sent Oyetola packing from Osun state. We’re dancing all around Osun today then to the Government house. Imole ti de.”

@Ade_sheun “Congratulations to the people of Osun State. Anyhow it goes, na una win. The era of vote not counting is gradually going out of our lives.”

@SeunAwogbenle “A combination of Adeleke’s popularity, Oyetola’s lacklustre, fall out with Aregbesola and his TOPS, and the eternal reservation against Omisore in some parts of Osun, are some of the factors that have contributed to Oyetola’s failed re-election bid.”

@MomohNurudeen “For those that still voted for APC, this is the beginning of your downfall.”

@Architectsizzle “OsunDecides shows you only the popular candidate wins. So it’s not about the party. Even if #OBIdientlyYUSful was on Sowore party, the youths will vote that party.”

@OkeJonathan “Thank you INEC for being a fair umpire this time around. #OsunDecides2022. The mandate was stolen 4 years ago. Now it’s back to the rightful owner. We have always told them. Osun remains a PDP state. We might experience flip. But trust me we know where we belong to.”

@Rsd_Busari “Era of writing election results is gone, Thanks to the new Electoral Act 2022(As Amended). If you still think your vote will not count then you are wrong!

@PastorBodeola “Congratulations to democracy, to everyone who came out to vote congratulations, INEC has done well we hope to see more of this fairness and credibility.”