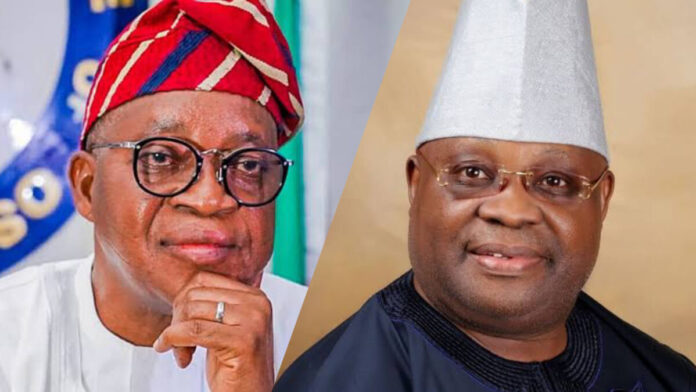 The governorship candidate of the Peoples Democratic Party, Senator Ademola Adeleke, has taken an early lead in the governorship election of Osun State.
According to results from the portal of the Independent National Electoral Commission, Adeleke is leading Governor Gboyega Oyetola of the ruling All Progressives Congress.

He has so far won eight LGAs — Olorunda, Ede South, Orolu, Osogbo, Odo Otin, Ifelodun, Atakumosa, Ila.
The pioneer leader of the ruling All Progressive Congress, Bisi Akande is from Ila LGA.
Meanwhile, Governor Oyetola won in Iwo and Ayedade LGAs.
The 2022 Osun governorship election, according to the Independent National Electoral Commission (INEC), is taking place in all the 30 local government areas of the state with 3,763 polling units and 332 registration areas.
The other 15 political parties’ candidates participating in the election include: Mr Oyegoke Omigbodun, Social Democratic Party (SDP); Dr Akin Ogunbiyi (Accord); Mr Yusuf Lasun (Labour Party); Munirudeen Atanda (Action Democratic Party).
In 2018, INEC declared Oyetola as winner, having polled 255,505 votes against Adeleke, who had 255,023 votes at the end of a supplementary election, which held in seven polling units across four local governments amidst allegations of harassment and other forms of malpractice.