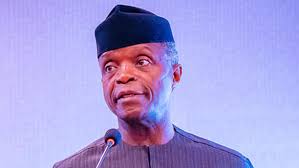 Doctors at the Duchess International Hospital, who performed the surgical operation on Vice President Yemi Osinbajo’s leg said the procedure was successful.

Laolu Akande, Media Spokesman to the Vice President, confirmed this in a statement on Saturday, following an earlier announcement that Professor Osinbajo was scheduled to undergo a surgical procedure.

According to him, Vice President Osinbajo is feeling well after the procedure at the Duchess International Hospital in Lagos.

A statement issued by the medical director of the hospital, Dr Adedoyin Dosunmu-Ogunbi, read: “The Vice President of the Federal Republic of Nigeria, His Excellency, Professor Yemi Osinbajo, SAN, GCON, was admitted to the Duchess International Hospital GRA, Ikeja, Lagos, today on account of a fracture of his right femur (thigh bone), possibly related to a longstanding injury associated with a game of squash.

“The operation was successful, and he is expected to be discharged within the next few days.”