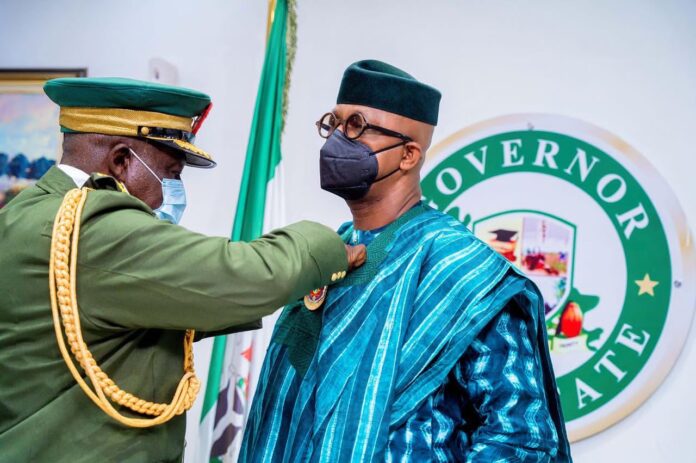 Ogun State Governor, Prince Dapo Abiodun, has disclosed that his administration would soon take delivery of drones to enhance security and assist security agencies in monitoring identified black spots in the state.

Abiodun, who disclosed this at the launch of the 2023 Armed Forces Remembrance Day Emblem, held at the Governor’s Office, Oke Mosan, Abeokuta, noted that the drones would be deployed particularly on the Lagos-Ibadan Expressway, to combat kidnapping, banditry, armed robbery and other forms of criminal activities being perpetrated on the highway.

The governor, while reiterating that his administration would continue to find ways of supporting security agencies in the state, said that plans were under way to partner top personnel in the law enforcement to come and work with the state by assisting with training, support and fund raising.

“We will soon be taking delivery of our drones that we have ordered, this will allow us to monitor the length and breadth of the Lagos-Ibadan expressway and all those areas where people engage in nefarious activities.

“We will continue to find those that will collaborate with us. I recently met with two persons who are highly placed in law enforcement and have decided that they are going to come and work with us by assisting with training, support and fund raising. I will unveil these people in the next couple of weeks and introduce them to you,” the governor stated.

He, therefore, on behalf of the Ogun State government, donated a sum of N10m to the Nigeria Legion and charged its personnel to continue to discharge their duties accordingly.

Abiodun, however, called on the people of the state and the country as a whole to see the remembrance of the country’s fallen heroes as an opportunity to appreciate their sacrifices by looking after the welfare of their widows and immediate family members, noting that they shouldn’t be left alone to weather the storm of loneliness.

Abiodun congratulated the Brigade Commander of the 35 Artillery Brigade, Alamala and his counterpart at the National Drug Law and Enforcement Agency (NDLEA), Brigadier General Isa Abdullahi and Mrs Archie- Abia Ibinabo, on their promotion to the rank of Major General in the Nigerian Army and Assistant Controller General of the NDLEA, respectively.

He further commended the duo for discharging their duties very responsibly and meritoriously.

In his remarks, the State Chairman of the Nigeria Legion, Master Warrant Officer Olumuyiwa Orukotan (rtd) commended Governor Abiodun for being a pillar of support to the Legion in the state.

He lauded him for empowering over one hundred and twenty widows in the last two years.

Orukotan disclosed that the Legion has directed chairmen and legionnaires to urge parents and guardians to educate their children or wards to steer clear crimes, criminality and thuggery as the 2023 general election draws closer.

He further called on citizens of the country to spare a thought about the suffering of the widows and dependants of fallen heroes and do all within their power to come to their aid.