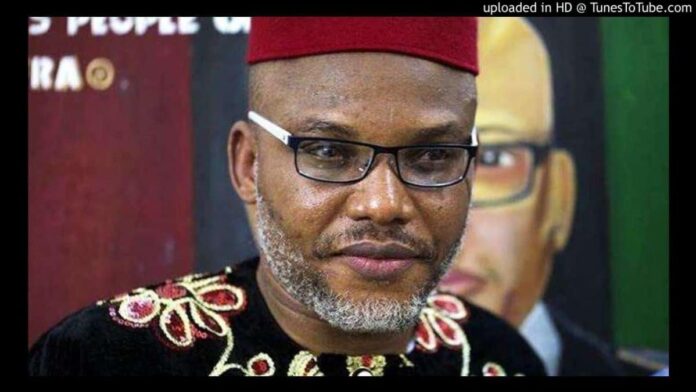 The IPOB leader made the request in a statement released by his lawyer, Ifeanyi Ejiofor.

Nnamdi Kanu, leader of the Indigenous People of Biafra (IPOB), has made one request from his followers.

Recall that Kanu is to appear in court today (Tuesday).

The IPOB leader in a statement released by his lawyer, Ifeanyi Ejiofor, charged the followers to intensify their prayer and supplications for him.

According to Ejiofor, the legal team of the IPOB leader will be led by Mike Ozekhome, (SAN).

Ejiofor disclosed this on Monday after visiting Kanu at the headquarters of the Department of State Services (DSS).

He said, “Kanu specially requests you all to intensify your prayers and supplications and also extended his profound love and a deep sense of regard to you all.”

Following Kanu’s appearance in court today, IPOB declared a sit-at-home across the SouthEast.

In a statement on Saturday, the IPOB’s Media and Publicity Secretary, Emma Powerful stated that the sit-at-home was in solidarity with its detained leader, Nnamdi Kanu, who will be appearing in court on Tuesday.

They insisted that there shall be a total lockdown of the whole five states in the South-East for two reasons: Kanu’s court appearance and the visit of Buhari to Owerri, Imo State.