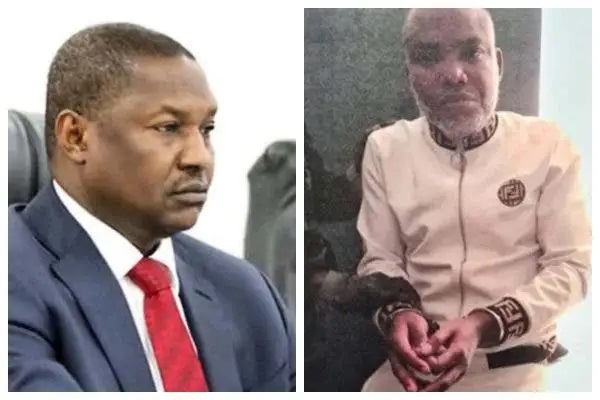 The National Security Council stated on Friday that it agreed with Abubakar Malami, the Attorney-General of the Federation and Minister of Justice, on the Appeal Court decision regarding Nnamdi Kanu, the leader of the Indigenous People of Biafra, which overturned his whole acquittal.

The Minister of Police Affairs, Mohammed Dingyadi, disclosed this to State House Correspondents shortly after the NSC meeting presided over by the President Muhammadu Buhari, at the Aso Rock Villa.

Dingyadi, who spoke alongside his counterpart in the Ministry of Interior, Rauf Aregbesola, said Kanu was only discharged even as the government would now explore other legal instruments to pursue the matter.

However, he noted that the council did not discuss a possible political solution which Malami had raised last November.

The council, he said, only discussed the Appeal Court judgement but noted that solutions to such matters could be considered so far as they are not subjudice.

Malami, in a televised interview late Thursday, said the Federal Government may consider any route, including political, to resolve the crisis surrounding IPOB’s agitations.

Fielding questions on Kanu and another separatist agitator, Sunday Igboho, the AGF said, “As far as the security situation is concerned and as far as governance and this administration is concerned, you cannot rule out all possibilities.

“But then, there has to be an approach for the government to consider.”

The council also directed the Office of the National Security Adviser in conjunction with the Office of the Secretary to Government of the Federation to convene a high-powered investigation committee on the crude oil theft in the Niger Delta to expose those behind it.