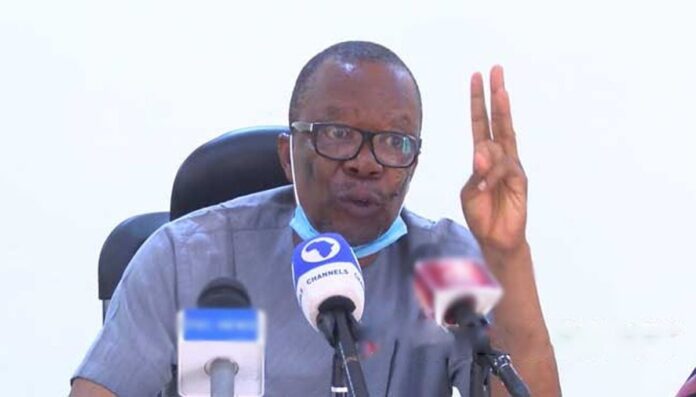 The Academic Staff Union of Universities (ASUU) has instructed its members to resume all previously discontinued services as of Friday at 12:01 a.m.

This was said in a statement released by ASUU President Prof. Emmanuel Osodeke on Friday in Abuja following the union’s National Executive Council (NEC) emergency meeting.

Osodeke said the meeting was called to review the developments since the union declared an indefinite strike action on Aug. 29.

He added that others are the University Transparency and Accountability Solution (UTAS) as a broad spectrum software to stop illegality and provide for an alternative payment platform in the university system and renegotiation of the 2009 Agreement.

According to ASUU president, NEC noted with regrets that the issues in dispute are yet to be satisfactorily addressed.

“However, as a law-abiding union, in regard to Mr. President’s appeals, and in appreciation of the efforts of the Speaker of the House of Representatives, Rep. Femi Gbajabiamila and other well-meaning Nigerians.

“ASUU NEC resolved to stop the strike action initiated on February 14,” he stated. “Therefore, all members of ASUU are hereby directed to resume all services previously withheld with effect from 12:01 on Friday, October 14,” he said.

Osodeke, however, noted that during the intervening period, the Minister of Labour and Employment, through a referral, approached the National Industrial Court (NIC).

“Whether the on-going prolonged strike by the Academic Staff Union of Universities which started since Feb. 14 is legal even after statutory apprehension by the Minister of Labour and Employment?

“In addition, he asked for an interlocutory order against the continuation of the strike,’’he added.

He said the National Industrial Court in its wisdom gave an order compelling ASUU to resume work pending the determination of the substantive suit.

Osodeke added that given the nature of the order, and in the opinion of our counsel, there was the need to appeal the interlocutory injunction granted against our Union at the Court of Appeal.

He said the Court of Appeal acknowledged the validity of the grounds of the Union’s appeal but still upheld the order of the lower court.

“It ordered our union to comply with the ruling of the lower court as condition precedent for the appeal to be heard, ‘’he said.

NAN reports that ASUU embarked on the rollover strike on  Feb.14 over failure of the Federal Government to meet the demands of the union.

The Minister of Labour and Employment, Dr Chris Ngige, after what he described as “failed negotiations”, dragged the striking lecturers to the National Industrial Court.

The National Industrial Court had on Sep. 21 ordered ASUU to call off
the strike.

The court granted the motion on notice filed by the Federal Government directing the lecturers to return to classrooms.

Ruling on the interlocutory injunction, the trial judge, Polycarp Hamman, restrained ASUU from continuing with the industrial action.

However, ASUU through its lead counsel, Mr Femi Falana appealed the case at the Court of Appeal, Abuja Division..