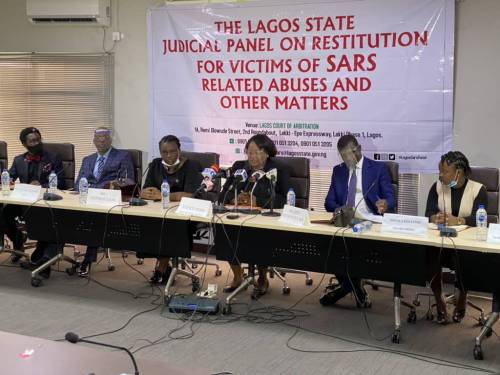 Fifty-Eight officers of the Nigerian Police Force have been indicted by the Lagos State Judicial Panel on Restitution for Victims of SARS Related Abuses and Other Matters for killing and brutalising Nigerians including #EndSARS protesters in the state.

Recall that the panel led by Justice Doris Okuwobi last Monday submitted its report to the state government accusing police officers deployed to the Lekki tollgate of shooting and assaulting unarmed protesters.

According to the report released by the panel the protesters at the tollgate on the 20th of October, 2020, were attacked by security operatives which led to injuries and deaths.

The panel further stated that police officers at the scene of the protest tried to cover up their actions by picking up bullets.

The report reads, “The panel found that the Nigerian Police Force deployed its officers to the Lekki tollgate on the night of the 20th October 2020 and between that night and the morning of the 21st of October, 2020, its officer shot at, assaulted and battered unarmed protesters, which led to injuries and deaths.

“The police officers also tried to cover up their actions by picking up bullets.”

The panel recommended to the state government that some policemen should be prosecuted for arbitrary and indiscriminate shooting and killing of protesters.

Foundation for Investigative Journalism, FIJ,  in its publication released the names and ranks of the officers accused of violating the rights of Nigerians protesting police brutality.

Police to investigate and prosecute all police operatives involved in the shooting and killing of unarmed persons around Tejuosho, Aralile and its environs on the 21st October 2020 in which the petitioner was shot dead

Inspector Smart, Officer Dagbo, Dapo, Yemi and Dayo of the Area F Police Station to be investigated and prosecuted for the unlawful arrest, torture and grievous harm done to the petitioner, Mr Babatunde Taiwo

Officer Chinyere of Ojodu Police Station to be investigated and prosecuted for her extrajudicial killing of late Charles Otoo on 21st October 2020 at Ojodu, Lagos State

Policemen who were on a raid from Ile Epo Police Station on 5th February 2020 and unlawfully shot Miss Mariam Shobukola which inflicted grievous harm to her are to be fished out, investigated and prosecuted

Police to fish out, investigate and prosecute police officers who shot on 12th October 2020 at Surulere, Lagos and thereby killed late Ikechukwu Iloamuzor

Inspector Iretegbe John, aka ‘Tallest’ and Officer ‘Offem’ of Ajangbadi/Ilemba police station to be investigated and prosecuted for extrajudicially killing late Mustapha Moruf Adeleke at Ajangbadi/Ojo, Lagos on 20th October 2020