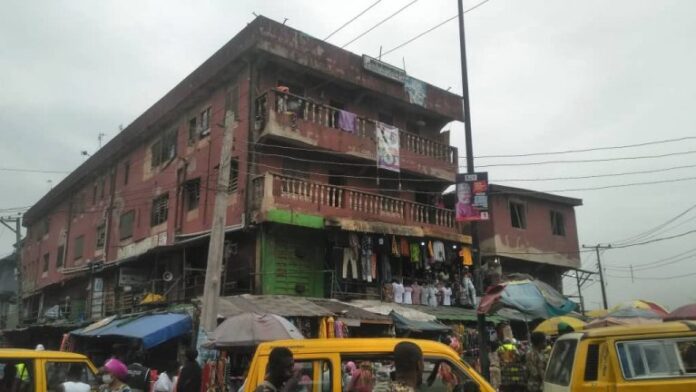 The Lagos State Building Control Agency (LASBCA) has cordoned off a distressed three-storey building in Oshodi with a seven-day evacuation ultimatum on traders and residents to save lives.

In a statement issued by LASBCA Director, Public Affairs, Mr Gbadeyan Abdulraheem quoted the General Manager, Mr Gbolahan Oki, as saying that the owner and occupants of the dilapidated building at No. 2 Brown Street, off Bolade Bus-Stop, Oshodi, should evacuate in 7 days.

They had earlier ignored several quit and removal notices served in the past.

Oki said the seven days ultimatum became necessary after the scientific and Structural Integrity/Stability Test (SIT) revealed that the high-rise building “is extremely dilapidated and a disaster waiting to happen’’.

According to him, there was a need for “removal of the structure to prevent loss of lives and in line with the government’s drive to achieve zero tolerance to building collapse for the safety of Lagos residents.

He explained that the SIT tests were carried out by a team of LASBCA experts and its sister agency, the Lagos State Material Testing Laboratory.

The general manager urged the traders/residents to vacate the building for their own good before April 15.

He added that this would allow the agency to remove the building before a disaster would occur.

“The government will not fold its arms and watch a distressed structure of that magnitude collapse on her people without taking necessary action,’’’ he said.

While reaffirming the state government’s commitment to safeguarding lives and property, Oki called for the collaboration of residents in reporting distressed and non-confirming buildings to LASBCA district offices.

He said this would reduce the incidence of building collapse.