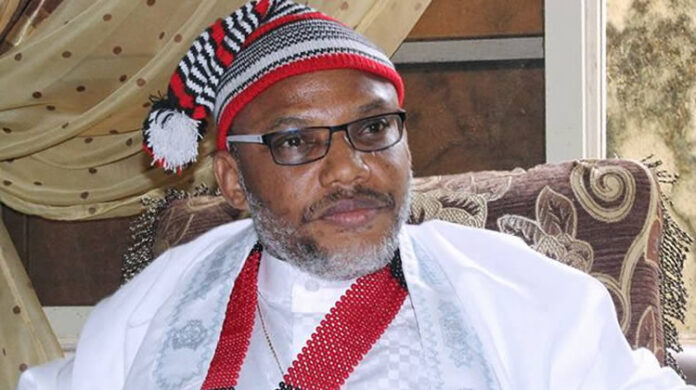 The Federal Government filed an application with the Court of Appeal in Abuja on Monday, asking for a stay of execution of the court’s decision ordering the release of Nnamdi Kanu, the leader of the proscribed Indigenous People of Biafra.

Justice Haruna Tsanami, who presided over the hearing of the application, announced that a date for delivery of judgment would be communicated to the parties when ready.

The Federal Government while arguing the application told the Court of Appeal that Kanu constituted a huge threat to national security and must be kept in detention to have relative peace.

The government also said that Kanu was a flight risk and would escape out of the country if the judgment which ordered his release was not stayed.

In a motion for stay of execution of the October 13 judgment delivered in favour of Kanu, the FG insisted that the Biafra nation agitator would throw the nation’s security into jeopardy and prejudice to the public and private economic activities.

The FG’s counsel, David Kaswe, while arguing the motion informed the appellate court that Kanu had earlier demonstrated to be flight risk when he jumped out of the country when granted bail in the terrorism charges against him at the Federal High Court in Abuja.

Kaswe insisted that it was in the interest of justice and the need to have relative peace in the South-East and the whole Nigeria that Kanu be made to remain in detention pending the resolution of an appeal already filed at the Supreme Court.

“My Lords, our concerns, the concern of the Federal Government is the threat the release of Kanu poses to the security of this country and its political, social and economic activities. We will not be able to lay hands upon him if he is allowed out of detention and finds his way out of the country”, Kaswe said.

He therefore prayed the court to stay the execution of the court judgment to enable Kanu remain in custody pending when Supreme Court would finally determine the pending appeal.

However, lead counsel to Kanu, Chief Mike Ozekhome (SAN), dismissed the claim that Kanu jumped bail in his trial at the Federal High Court.

Ozekhome claimed that the Military unjustly invaded Kanu’s ancestral home and that it took God’s grace for his client to escape death.

He informed the court that the Federal Government was in contempt of court by not obeying the October 13 judgment and as such, had no moral and legal rights to make the request from the same court.

Contrary to the FG’s claim, Ozekhome said that it was only the release of his client that would ensure peace and tranquility not only in the South-East but the entire country.

“My Lord, the action of the FG in respect of Nnamdi Kanu is an insult, a slap in the face to this court. It is also an invitation to anarchy and I humbly urge this court to dismiss the application for lacking in merit,” he said.

Justice Tsanami, after taking arguments from parties, announced that judgment had been reserved and that lawyers would be communicated when it was ready.