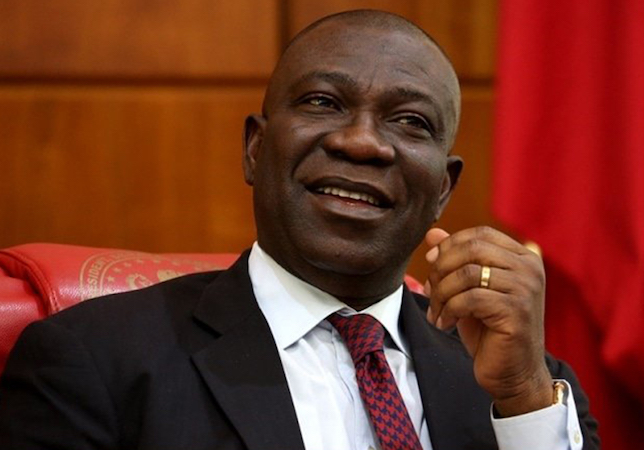 The former Deputy President of the Nigerian Senate, Senator Ike Ekweremadu, who is standing trial in the United kingdom (UK) over alleged conspiracy to harvest organ, the people of Mpu community in Aninri Local Government Area (LGA) of Enugu State in a demonstration of solidarity with their son shut their market at the weekend to pray for divine intervention in the case of their son and his wife.

The community equally appealed to the Federal Government of Nigeria to intervene in the continued detention of their son, insisting that his continued detention was injustice both to him and Nigeria, as Nigerian government could not have treated a UK Member of Parliament in the same manner.

They made the appeal during a one-day prayer summit organised by the leadership of the community to seek divine intervention on the matter.

Leading the prayer, the head Pastor, Ancient Path Restoration Revival Assembly, Pastor Nathaniel Nwankwo, admonished the people to put their faith in God as the ultimate decider of every case.

“We are committing Mpu Community primarily to God, thanking Him for the good things he has done for the land and asking for divine intervention in the trouble surrounding our brother, Senator Ike Ekweremadu, who had been away from the shores of Nigeria since June 21,2022 for an allegation that has no basis”.

The President-General of the Community, Chief Francis Oshimiri-Ude, said Ekweremadu had saved so many lives by his acts of philanthropy, expressing grief that “water appears to be sticking between his teeth for trying to do the same for his own daughter”.

“Senator Ekweremadu is our illustrious son. Without him, our world seems shattered. We know he didn’t commit any crime. This is a man with a heart of gold, who has transformed our communities and many communities in Enugu West and beyond.

“So, those holding him should investigate his life style from birth to know that he has good records, the reason we started giving leadership responsibilities even before he was 10 years old.

“He should be released unconditionally to rejoin his people and continue his good works, which he had been carrying out for over 20 years now”, he reiterated.

In a sombre mood, one the women leaders, Mrs. Happiness Ajah, said they had cried uncontrollably because their son is all they have.

“We are not protesting. As you can see, we have no placards. As mothers, we are concerned about Ike, the wife and the sick daughter.

“The world should come to our aid. God should deliver our son for we know he is innocent. Many people that depended on him for survival are now helpless. No grants anymore for our farming activities, no one to pay or subsidise our children’s school fees and medical bills. You see, there are single individuals that when something happens to them, the entire community becomes helpless and comes crumbling. That is what Ikeoha is to the entire Mpu and Aninri. So, God, please help us” she cried out.

The Royal fathers, who described the Senator as a great achiever and a worthy Nigerian, encouraged members of the community to intensify prayers without ceasing until something positive happens and called on the South East Traditional Rulers Council to meet with President Muhammadu Buhari on the matter, especially given Ekweremadu’s usual interventions for other Igbo leaders in difficult situations.

They said: “We closed the market and shops today to demonstrate the weight of anger in us over our brother’s incarceration in the UK. In fact, it is to show that we are highly annoyed.

“We are also here to ask God for his mercies, to bring back our brother and son, who has been held overseas for trying to save his daughter in a proper way. He wrote to the UK authorities and did not hide anything.

“The Mpu people are feeling bad because we know our son as a peace loving someone, who doesn’t believe in doing things wrongly, but we have handed his matter over to God, believing that there is nothing human beings can do when God says yes”.

In their separate remarks, the councillor representing Mpu Ward, Hon. Edwin Ogbuka and the coordinator of Town Union Presidents in Aninri LGA, Chief Nwabueze Okoro, expressed worry about the long adjournments and trial schedule and appealed to the Federal Government to eschew political sentiments and do the needful.

“Things have not been normal in our town politically and otherwise since the absence of Distinguished Senator Ike Ekweremadu. In fact, we are not happy in Mpu and in the political circle that an Iroko tree, a political hero, who piloted Nigeria’s electoral reforms and constitution amendments have been away from the town as we approach the 2023 general elections.

“Again, we know that a UK parliamentarian could not have been humiliated and held indefinitely by the Nigerian government in the manner the UK is doing.

“Therefore, today the entire Mpu people, both old and young, gathered to pray to Almighty God as their last hope. We are asking God to intervene and we are also asking the Federal Government to do the right thing irrespective of tribal, religious, and political differences.

“They did it for one Zainab Aliyu held in Saudi Arabia over drugs. So, why can’t they do it for an illustrious lawmaker and highly detribalised Nigerian like Ekweremadu, who was merely trying to save his daughter and was also open to the UK government. This is not just about Ekweremadu. Nigeria as a whole is being diminished”, they stated.

It is recalled that Akaeze community in Ebonyi State had in September suspended the 2022 edition of its annual new yam festival in solidarity with Ekweremadu’s ordeal, recalling the road infrastructures he attracted to Akaeze and other neighbouring communities, not minding that he hails from Enugu State.