Inside G-5 governors’ deal with Tinubu 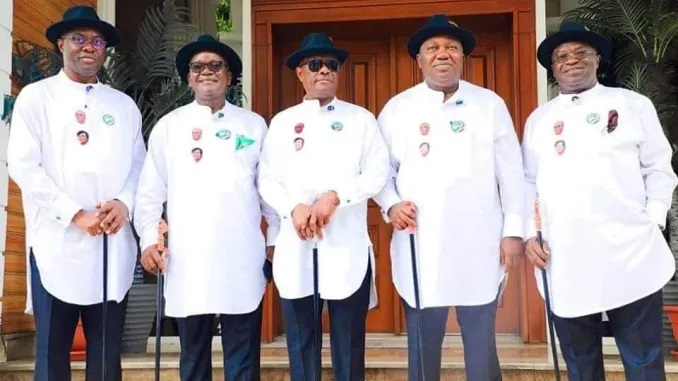 The presidential candidate of the All Progressives Congress, APC, Asiwaju Bola Tinubu, apparently holds the aces in the deal being worked out with the Governor Nyesom Wike-led G-5 Peoples Democratic Party, PDP, governors ahead of the 2023 general elections.

Vanguard gathered, on Friday, that the APC candidate, whose election comes first, has agreed to the deal in principle.

Acting on the confidence of the party’s structure and geo-political spread, the APC candidate, it was gathered, will be insulated from making any financial commitment to the G-5 or the party’s candidates, whose positions are being sacrificed.

A reliable source said: “Having considered the odds, G-5, I can tell you, have cast their lot with Asiwaju.

“Agreement is signed, sealed and waiting for delivery.

“As part of the deal, Asiwaju is to deflate his party’s campaign in the respective states to accommodate the interests of the G-5. We all know that Asiwaju is APC, and APC is Asiwaju.

The source noted that to the uninitiated, the case of Oyo State is complex and appears untenable, but that the situation on ground points to its simplicity.

According to the source, “The APC candidate is expected to simply withhold financial and moral support for the governorship candidate in order to reduce the intensity of campaign against Makinde.

“This is further simplified by the fact that as at today, there are effectively three factions in the state.

“Teslim Folarin controls one, remnants of the Accord Party which collapsed into the APC are on their own and the legacy parties (Action Congress of Nigeria, Congress for Progressives Change and the All Nigeria Peoples Party) that came together to form APC consider Folarin a usurper and are determined to fight him.”

The source further said, “It is not for nothing that aside from Tinubu’s open instruction to Folarin to reconcile aggrieved members sometime in June, neither the party nor the presidential candidate have made any serious effort to reconcile them.”

Asked whether the issue of the state campaign being starved of funds will not be counterproductive, the source said, “Of course, there will be complimentary funds from the national body.

“But tell you what, it will be channeled through Makinde’s allies within APC ranks, who will know when and how to deploy.

“In politics, as in war, timing is a key component of strategy.”