I rejected Tinubu’s offer to run for senator, said Wike 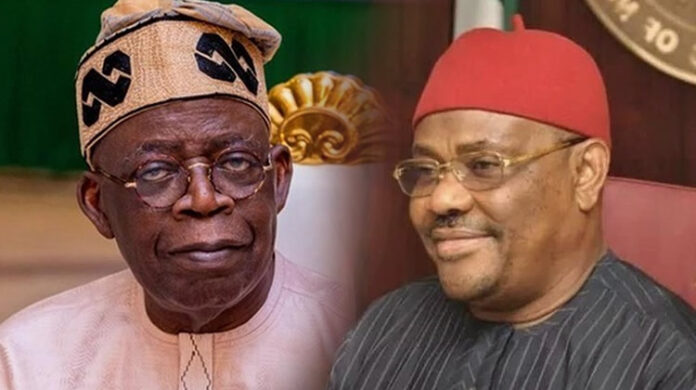 Nyesom Wike, the governor of Rivers State, revealed on Friday that Bola Tinubu, the presidential candidate for the All Progressive Congress, had offered him a senatorial ticket to entice him to join the party.

He said the former Lagos State governor offered him the ticket after the Peoples Democratic Party presidential candidate, Atiku Abubakar, failed to fulfill his promise after he emerged as the PDP’s presidential flagbearer.

He, however, said he turned down the offer and insisted that he would remain in the main opposition party despite his grievances, adding that he never contested the primary to settle for a vice-presidential or senatorial ticket.

“I didn’t contest so I can become a vice presidential candidate, I am not like others who were not serious and bought senatorial form alongside presidential form and that’s why when Tinubu offered me senate slot, I didn’t go for it,’’ wike said during an ongoing media parly in Port Harcourt.

“Aside from Tinubu, who is from the APC, other political parties are talking to me as well including Labour Party because they all know my worth and how I can ensure that they win the 2023 poll. But I have not accepted any of the offers presented by those parties,” the governor added.

Some governors elected under the platform of APC met with Wike in Porth Harcourt, Rivers State’s capital ahead of the 2023 elections.

Others in their entourage include the Ekiti State Governor-elect, Biodun Oyebanji; former Ekiti State governor and Peoples Democratic Party chieftain, Ayodele Fayose, among others.

Before the APC governors’ visit, there had been reports that the APC candidate, Bola Tinubu, and Wike met in France. The reports were, however, debunked by the former Lagos State governor’s media aide, Tunde Rahman, who described them as “fake news”.

The APC governors may have banked on the fallout of Wike with PDP leadership after the main opposition party’s presidential primary to woo the Rivers governor to their side ahead of the 2023 presidential election.

But when asked on Friday if other political parties are wooing him to join them, Wike said, “They know I am important and that is why they are wooing me.

“Who does not want to win Rivers State? Why won’t they (opposition parties) talk to me? So many parties are talking to me.”

When probed further on the likelihood of his actions of entertaining other political parties’ offer may be termed as anti-party activities, he said, “Our presidential candidate, did he not talk to APC people?

“You see, if you’re an asset, people must come and talk to you. Who is a pretty girl that nobody wants to talk to?”