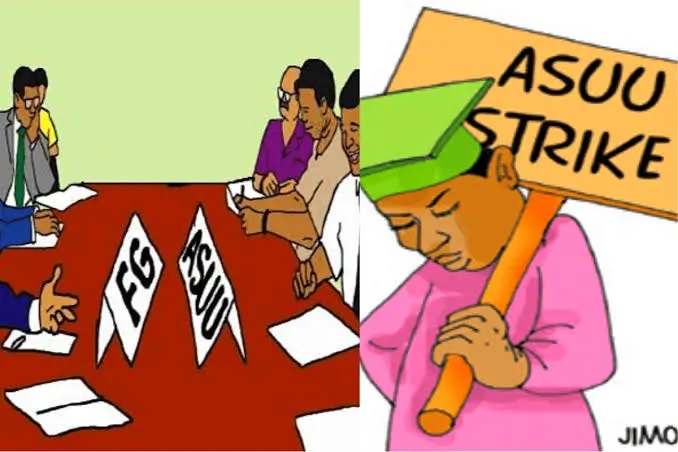 The Academic Staff Union of Universities has clarified that the N1.1 trillion fund for the revitalisation of public universities was a commitment made by the Federal Government and not the union’s idea.

The chairman of ASUU, Niger Delta University chapter, Kingdom Tonbara, made the clarification during a phone-in programme on Rhythm 94.7FM, Yenagoa, on which he appeared alongside his secretary, Ebi Baraka, on Saturday.

This is as they insisted that ASUU-NDU would not pull out of the ongoing national strike, adding that the chapter’s involvement in the union’s previous struggles had resulted in the transformation of the Bayelsa State-owned university, which was hitherto described in some quarters as “a glorified secondary school”.

The Minister of State for Labour and Employment, Festus Keyamo, had in August declared that the Federal Government would not borrow N1.1trn to end the ongoing nationwide industrial action embarked on by the national body of ASUU since February 2022 over the government’s failures to implement the 2009 agreement, among other issues.

Keyamo, who spoke on a national television, claimed that the union was trying to blackmail the government into borrowing the money while other sectors also need attention.

Tonbara said the N1.1trn revitalisation fund for public universities was proposed by the Federal Government in 2013 when the university teachers downed tools for six months to drive home the need for the government to save the institutions from infrastructure decay.

He noted that the government came up with the figure following a report submitted to the Federal Executive Council by a committee inaugurated by the President Goodluck Jonathan administration to visit all public universities to ascertain the level of decay in response to an earlier complaint by the union in 2012.

Tonbara said, “That report was presented to the Federal Executive Council where they looked at it and they shouted, from what we are told; that, that means Nigerian universities have completely decayed and that they needed to pump in massive funds into public universities to revitalise our universities.

“And they (Federal Government), not ASUU, came up with N1.1trn to be pumped into public universities; not ASUU. And they said they don’t have the money even though they have realised that from the assessment, they needed N1.1trn.

“It was ASUU that recommended to them that you can spread this (money) into six years and the payment is not going to be made to ASUU but it will be given to the administrators of the universities to develop the universities, both state and federal universities.”

The ASUU-NDU leader continued: “So, the then President, after agreeing, was unable to release this money. That’s why we went on strike in 2013 for six months. At the end of that six months’ strike, the President graciously released N200bn instead of the normal N220bn that we had agreed. He released N200bn.

Tonbara explained that the N3bn was very useful to the management of the NDU as it was able to build brand new faculties of agriculture and arts, auditorium and two hostels while a library abandoned since 2004 was also completed and equipped.