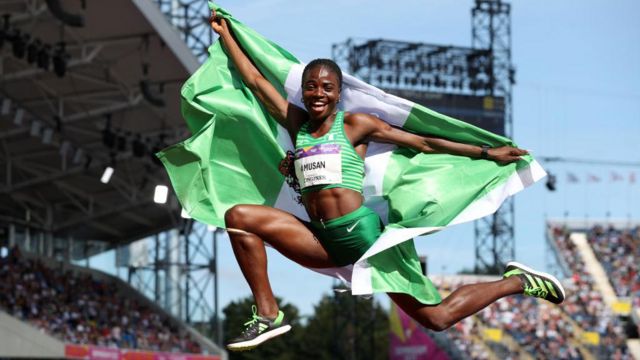 World record holder Tobi Amusan dominated the women’s 100m hurdles at the ISTAF 2022 Berlin meeting on Sunday, winning in a time of 12.45 seconds. The meet is part of the World Athletics Continental Tour Silver level series.

Amusan entered Sunday’s race on the back of a second-place performance at the 2022 Lausanne Diamond League meeting last month, but said she was confident of bouncing back at the Olympic Stadium this weekend.

The Nigerian standout got off to a strong start to build a sizable lead and then powered away to secure the victory.

She hit the last hurdle and was pictured limping at the end of the race, even minutes after her celebrations. But, the world champion revealed afterward that she was okay and is now looking forward to her next competition at the 2022 Wanda Diamond League final in Zurich later this week.

American two-time world junior champion Tia Jones finished strongly over the closing barriers to take second place with a time of 12.58 while Olympic bronze medalist Megan Tapper of Jamaica was pushed back into third place in 12.66.

Amusan said after her victory: “It has been a long season, but I am still alive. I just wanted to finish strong today. I was here to execute.

“I will race again in Zurich. Today we had a great competitive field. My goal was to focus on myself.”

Amusan won the world title in Oregon in July with the fastest time in any conditions at 12.06 seconds, hours after running 12.12 seconds to set the current world record in the semi-final.

Meanwhile, the top German finisher was Isabel Mayer who ran a personal best time of 13.24 to better the 13.25 she clocked in June.

“It could not have been better for me today,” said Mayer. “I was super excited because the German Championships here were a bit traumatic for me. I felt very good today.

“I just wanted to have fun and that worked out today.”

Also, Ese Brume, who clinched her first win at the Diamond League Meet, winning the Women’s Long Jump event at the Allianz Memorial Van Damme in Brussels, Belgium on Friday, finished second in the women’s long jump event in Berlin.

The Commonwealth champion jumped 6.78m to finish behind world and Olympic champion Malaika Mihambo, who won with a leap of 6.92m.