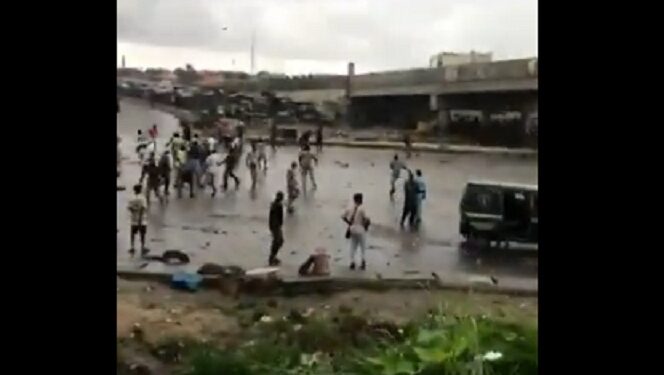 Two factions within the National Union of Road Transport Workers clashed on Wednesday at the Iyana Iba neighborhood in Lagos, left several people hurt and many cars damaged.

According to a witness, the unrest began in the evening when two factions; one loyal to the union’s former leader and the other to their new boss, engaged in a struggle for dominance.

Justice Oluwole, the witness, claimed that the association’s members engaged in a free-for-all with deadly weapons like a dagger, machete, charms, and shattered bottles.

“I can’t tell you what really caused the fracas, but the two factions were against each other. They inflicted injuries on themselves.

“There was pandemonium as people scampered for safety, while some motorists abandoned their vehicles on the road, causing serious gridlock. Many shop owners closed shops. As I am speaking with you, many people have been injured while the road is littered with broken bottles and shattered vehicles’ windshields and other accessories.

“Many people are forced to trek home as vehicles are avoiding the axis. I thank God that the police have arrived the scene and are trying to reclaim the public places.

“The State Government should do something urgent to resolve the crisis between the factions or the problem will escalate during the forthcoming electioneering period.

“If the government does not expedite action, the crisis may consume many souls, while many properties would be damaged.”

However, Lagos State Police Public Relations Officer, SP Benjamin Hundeyin, confirmed that there was crisis between two factions of NURTW.

“One person was injured and he is receiving treatment in the hospital. No life was lost and the police have moved into the place. No arrest has been made, but normalcy has returned to the place.”

Meanwhile, the Lagos State Government has commenced investigation into the transport union fracas which occurred at Iyana-Iba and Lagos Island, in the early hours of yesterday.

The state government condemned the unruly act of members of the Road Transport Employers Association of Nigeria in some areas, and warned them not to disrupt the peace and tranquility being enjoyed in the state.

The Special Adviser to the Governor on Transportation, Sola Giwa, gave the warning yesterday after the fracas that broke out in some parts of the state, following a protest by some RTEAN union members who were demanding the removal of the national president of the association.

Addressing the protesting members, Giwa called for calm and warned that the government will not tolerate any breakdown of law and order in the state.

He added that the commissioner of police has deployed officers to the affected areas to deal with erring members of the union.

The special adviser said the state is investigating the allegations leveled against the national president of the union and would resolve every lingering issue, while calling on members to maintain peace.

Giwa reiterated the need for unions to always adopt peaceful ways of resolving their indifferences, rather than resorting to fracas and violence. He promised to disclose the outcome of the investigation when concluded.