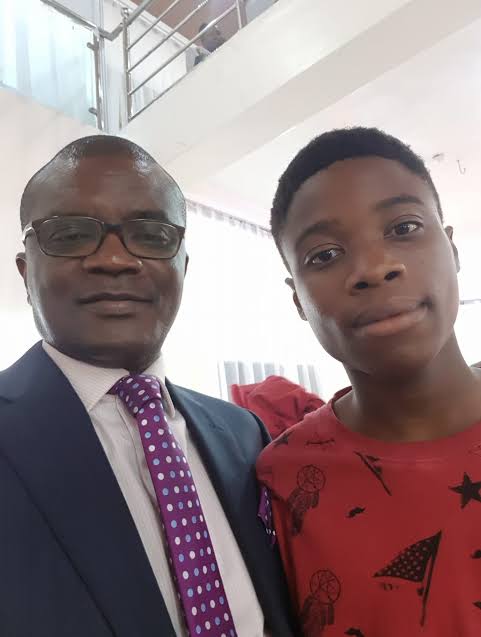 Former Rivers State Commissioner for Information, Emma Okah, has awarded two years university scholarship to Philemon Igbokwe for returning a phone forgotten in the washroom by a wedding guest in Port Harcourt recently.

Okah announced the award on Monday during the formal presentation of the boy to the staff and students of Federal Government College, Rumuokoro in Port Harcourt where he schools.

Speaking at the event, Okah recalled how Igbokwe, who did not have a phone, proved to be a boy of integrity and high moral upbringing by refusing to steal one which he saw in the washroom and urged other students to emulate his God-fearing character so that they too will be celebrated and remembered for good and not evil.

“We are celebrating Philemon today because he has shown how to be a good boy of his family and an ambassador of this great school.

“If every student here will shun vices and behave like him, you will be decorated in honour and the sky will be your limit as I see presidents, governors, congressmen, doctors, lawyers, etc in this assembly,” Okah said.

According to him, those who do good write their names in gold and Heaven is proud of them, while the bad ones are shamed and embarrassed as even the devil will deny them when God calls.

He announced that in addition to the earlier cash gifts to the boy, a good spirited man, Engr Bola Balogun, has also donated an android phone to Igbokwe in appreciation of his rare behaviour.

Okah said Nigeria is going through a difficult time of moral decay and searching for role models in the moulds of Igbokwe to heal the land.

His exemplary behaviour gives hope for a better future for our youths and country at large, he said.

Presenting Igbokwe to the staff and students, the Principal of Federal Government College, Rumuokoro, Port Harcourt, Inyang Ukpe, poured encomiums on him and described him as a good ambassador of the school and urged other students to emulate his good conduct and live an upright life as a pathway to success.

Ukpe thanked Okah for championing the cause of the boy since the event took place and prayed for those who have donated to support the boy’s education.

Speaking on behalf of the Federal Government Colleges Old Students Association, the National Welfare Officer, Orevaogene Pius, congratulated Igbokwe for his honesty and said the association was proud of him.

Pius appealed to the students to shun stealing or do things that will bring disgrace to them, their families and the school.

He announced a cash donation of N30,000 to Igbokwe on behalf of the school’s Year 2002 graduates, while the National Association has awarded scholarship to the boy for two terms in the school.

He further said the American branch of the association had congratulated him and will be announcing their financial package to support his education.

He urged the students to be of good conduct and assured that no good deed will go without a corresponding reward.

In his response, Igbokwe said he was grateful and humbled by the public appreciation of his returning the forgotten phone, which he saw in the toilet.