Pantami curses Adeyanju with Allah over letter to US, deletes post after 350 comments 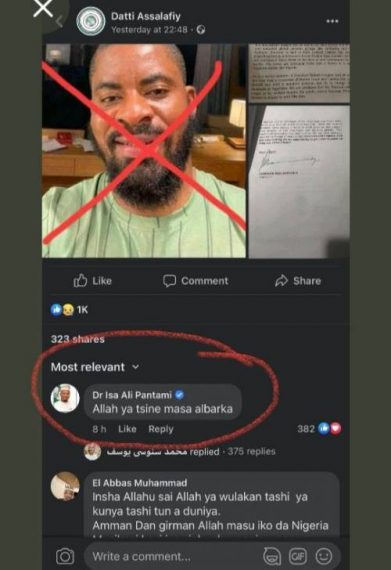 The Minister of Communications and Digital Economy, Dr. Isa Pantami, created a buzz on Facebook when he placed a curse on the Convener of a human rights group, Concerned Nigerians, Deji Adeyanju, over his letter to the United States of America to place him on the Terrorism Watchlist.

Pantami used the opportunity of a post on Facebook by one Datti Assalafiy wrote to place the curse on Adeyanju, who once worked with former President Olusegun Obasanjo and a chieftain of the Peoples Democratic Party.

“He is one of the enemies of Nigeria’s peace that has won a contract to spread the #ENDSARS crisis on social media which has cost Nigeria more than N3 trillion.

“He is the one who has now written a letter of complaint to the US Embassy in Abuja, requesting that the United States place Sheikh Dr Isa Ali Pantami on a list of people responsible for terrorist activities around the world, and that the embassy accepted his complaint.

“No matter the fate and destiny, there is nothing to associate with these pagans who hate us all the time and their parents.

“O Allah, show this pagan one of your verses, may Allah grant him a long life in hardship and humility to witness the glory of Malam Isa Ali Pantami and the Muslims in Nigeria. Amen Yaa Hayyu Yaa Qayyum.”

Commenting on the post with his verified Facebook page, Pantami wrote in Hausa: “Allah ya tsine masa alubarika.”

Translated, this means: “May Allah rebuke his blessings.”

However, Pantami was to later delete the comment after it had garnered over 350 replies, with most of them not in his favour.

Adeyanju had in a letter dated April 11, 2021, with the the heading: “Terrorist Watchlist – Isa Pantami,” addressed to the Secretary of State, Antony Blinken, said Pantami, being a senior member of the President Muhammadu Buhari-led administration should not be a supporter of world’s extremist leaders such as Mullah Omar and Osama Bin Laden.

He said if the allegation is true, “he (Pantami) should not hold a sensitive position and be in charge of the database of Nigerians.”