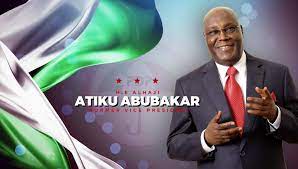 Former vice-president and serial presidential aspirant, Atiku Abubakar, has emerged as the presidential candidate of the opposition party, the Peoples Democratic Party.

Atiku emerged as a candidate at the end of the presidential primary after polling 371 votes.

He defeated the Governor of Rivers State, Nyesom Wike, who scored 237 votes.

The media had earlier reported that the Governor of Sokoto State, Aminu Tambuwal, had withdrawn from the presidential race and had given his support to the former Vice President.

He was a presidential candidate of the Action Congress in the 2007 presidential election coming in third to Umaru Yar’Adua of the PDP and Muhammadu Buhari of the ANPP.