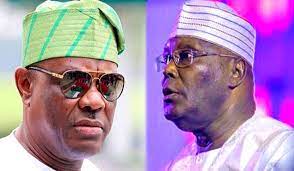 Celestine Omehia was de-recognized by the Rivers State House of Assembly as a previous governor of the state, marking the first significant casualty in the conflict between Nyesom Wike, the governor of Rivers State, and Atiku Abubakar, the PDP’s presidential contender for 2023.

The House altered a motion it voted in 2015 and approved another stripping Omehia of all of a former governor’s robes in a way that many people found difficult to understand.

A reliable source told The Point that Omehia is a victim of the “dirty politics of vindictiveness, ungodly ego, and unbridled desire to play godfatherism in the life of others.”

The source said “What just happened was all because he met Atiku. A grown-up man, a lawyer, and a man that was once a governor, he sat on that chair and table and made decisions for and on behalf of Rivers State. How can anyone say such a person does not have the right to personal decisions on who to support and work for in an election period? This is sad. This is very sad. And, to imagine that this matter was settled just back in 2015, so what has changed?” the source queried.

Martin Amaewmule, the leader of the House, introduced a motion on Thursday to overturn a previous resolution of the 8th Assembly from June 30, 2015, which required the Executive Arm, led by Governor Nyesom Wike, to recognize Omehia as a former governor and grant him all rights, privileges, and benefits.

He maintained that Omehia’s ongoing recognition in that position was a violation of the 2007 Supreme Court decision that dismissed Omehia as Governor for failing to be the legitimately elected candidate in that year’s election.

The legislator also provided a copy of the Nigerian Weekly Law Report, which contains the historic ruling that ousted Omehia and proclaimed Rotimi Amaechi as the legitimately chosen candidate of the PDP at the time and the proper candidate to hold the position of Governor.

The legislator noted that since the 9th Assembly now has a greater understanding of the aforementioned Supreme Court decision and its specifics, it is necessary to correct whatever errors and mistakes the state has made in relation to it.

Amaewmule, who is the representative for Obio/Akpor Constituency 1, presented the House with four requests.

1. That the House should rescind its earlier resolution that compelled the governor to recognize Omehia as an ex-governor.

2. That Omehia should cease to use the title “HIS EXCELLENCY” forthwith. And that Omehia should stop using the acronym “GSSRS”, meaning, Grand Service Star of Rivers State, a state honour meant for an incumbent and former governors alone.

4. And finally, any other decisions that the house deemed necessary.

The motion was seconded by the Whip of the House, Evans Bipi.

All of the lawmakers who spoke during the motion’s discussion, including Anselm Oguguo, who represents Celestine Omehia’s Ikwerre Local Government Area district, agreed to the prayers.

Some lawmakers asked for a precise decision to be made regarding what will happen if Omehia doesn’t return the money he has received as a result of being treated as a former governor as part of item number four.

Following the discussion, the four prayers offered by the House leader were approved by all 21 of the participants in the plenary.

Because no law is absolute, according to Rivers State House of Assembly Speaker Ikuinyi-Owaji Ibani, the house was correct in its judgment.

A chieftain of the PDP in the state who spoke to our correspondent on condition of anonymity said the development was capable of spelling doom for the party in the state.

“What has happened now is a very provocative development. Is PDP Rivers no longer one family? In 2015 you said the government should recognize him, today you’re saying disrobe him. This is the hand of Esau and the voice of Jacob. We know what is happening. It may not bode well for the party in the state,” he warned.