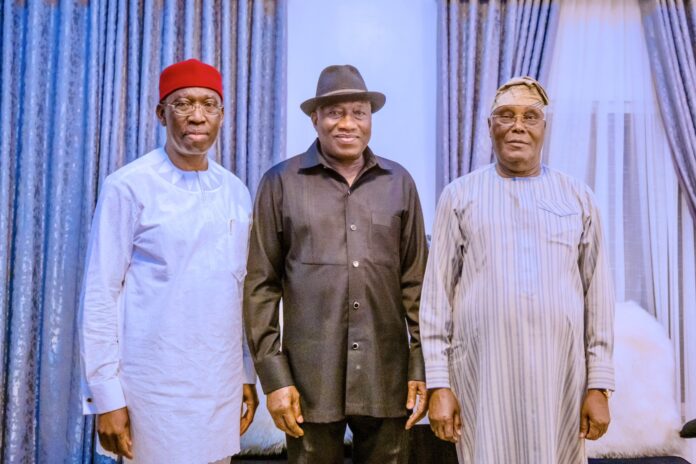 The PDP flag bearers in the 2023 presidential election met with the former president in Abuja on Thursday night.

Okowa, the governor of Delta State, announced the meeting, in a tweet via his verified Twitter handle on Friday.

The PDP vice-presidential candidate also shared photos of the meeting.

According to him, the conversation with Jonathan focused on how to reclaim power from the ruling All Progressives Congress, APC in the 2023 elections.

He tweeted, “Last night, alongside our Presidential Candidate, Alhaji @Atiku Abubakar, we had a great meeting with our former President, H.E. @GEJonathan. There, we discussed our plans to #RecoverNigeria with His Excellency.”

In similar vein, Atiku also announced the Abuja meeting, “Last night, I led a delegation alongside my vice-presidential candidate, Dr Ifeanyi Okowa, on a courtesy visit to former President Goodluck Jonathan at his residence in Abuja. -AA,” he wrote on his Facebook page on Friday.

Recall that Jonathan had endorsed the candidacy of Atiku and Okowa ahead of the 2023 polls.

Jonathan, during a visit by a PDP delegation led by Okowa as well as Governor Bala Mohammed of Bauchi state, in October, had described Okowa as Nigeria’s incoming Vice President.

The former president stated that he was willing and ready to support and work for the success of the PDP in the 2023 elections, wishing the party members success in all their endeavours.