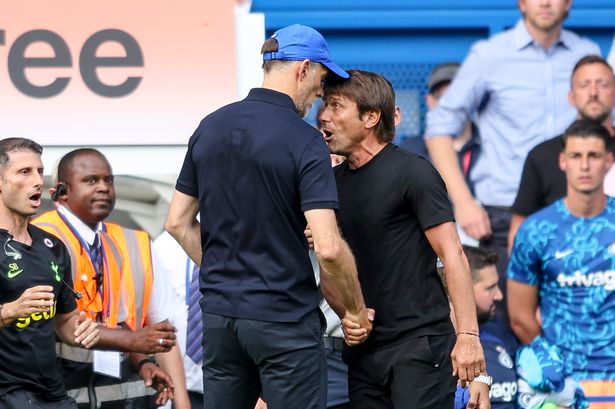 Despite saying he wanted to draw a line under their scuffle, Antonio Conte  has quickly reignited his feud with Chelsea boss Thomas Tuchel in a message posted on social media after the match.

The Spurs boss had his head down in disappointment at the time, with Harry Kane going on to snatch a late leveller for the visitors, and says he would have taken action – having previously clashed with a fellow tactician when seeing his own side hit the net – had he spotted an opportunity to stick out a leg.

Chelsea felt aggrieved with the refereeing in the match, with Tuchel calling for both a foul on Kai Havertz in an earlier phase of play before Spurs’ first equaliser and an offside on the goal, with Richarlison appearing to obscure Edouard Mendy’s view which make Tuchel furious and protest against Anthony Taylor, coupled with Conte’s celebrations, saw a heated coming together on the sidelines and both coaches were shown a yellow card.

Then, prior to Kane’s late header, Chelsea felt Cristian Romero should have been punished for tugging Marc Cucurella’s hair, though VAR looked at the incident and decided it was not serious foul play.

At full-time, Conte and Tuchel went to shake hands but the Chelsea boss would not let go of his rival manager’s hand, gesturing for him to look in his eyes, prompting another melee as both managers were given their marching orders.

But his opinion clearly changed after returning home, uploading a video of Tuchel running straight out of his technical area, past Conte and the Spurs dugout and along the touchline after Reece James made it 2-1.

The Spurs boss had his head down as Tuchel strode past him, and the Italian wrote on Instagram: ‘Lucky I didn’t see you… Making you trip over would have been well deserved.’

While Conte did not want to spend too much time discussing handshake-gate afterwards, he did make it clear that he felt Tuchel had been the aggressor – and perhaps, therefore, the only one that deserved a red card.