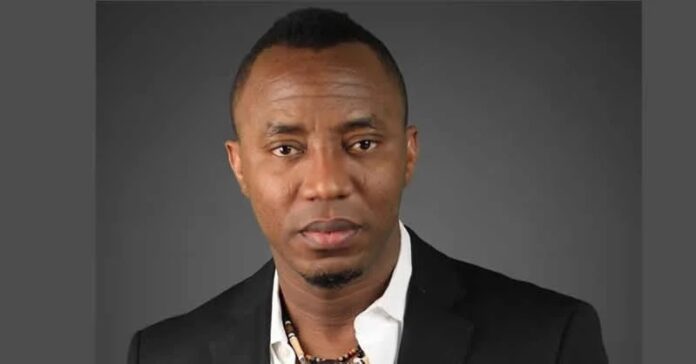 The presidential candidate of the African Action Congress and Convener of the #RevolutionNow movement, Mr Omoyele Sowore, has arrived in Lagos State today to attend the 13th Memorial Lecture of late human rights lawyer and activist, Gani Fawehinmi, as a guest speaker.

Sowore was arrested by operatives of the Department of State Service at midnight on August 3, 2019, for convening the #RevolutionNow protest slated for August 5 of the same year. He was later charged for treasonable felony among others and was released on December 24, 2019.

Sowore was thereafter put under city arrest, and was not allowed to leave the Federal Capital Territory until a Court of Appeal in Abuja lifted the movement restriction within the country on April 13, this year.

He is, however, still restricted by a court order from traveling out of the country, as his passport was seized.

The human rights activist arrived Lagos today to speak at the 13th memorial to the celebrated lawyer and activist, Fawehinmi, who died September 5, 2009. The event holds in the Ikeja area of Lagos today.

Chief Fawehinmi, who was until his death a Nigerian author, publisher, social critic and politician is fondly remembered for his activism and defence of the common man in court pro bono.

Fawehinmi became a SAN in September 2001, and was awarded the Senior Advocate of Masses in Obafemi Awolowo University in 1988, among other international awards.

In the course of his activism, Fawehinmi was arrested and jailed serval times by successive governments under the military rule.

Others who would be at the Monday programme include the Chairman, Centre for Anti-corruption and Open Leadership, Debo Adeniran; the General Secretary of the Federation of Informal Workers Organisation of Nigeria, Gbenga Komolafe and others.

The programme divided into three lectures was  themed as follows: (1) A reflection of 23 years of electoral system and democracy in Nigeria; which way forward? (2) Fuel subsidy regime: Corruption in the oil industry and the way out. (3) Crisis in Nigeria educational system and indefinite strike action of the Academic Staff Union of Universities.