Wike Signs Anti-Open Grazing Bill, Bill On VAT Collection And Others Into Law 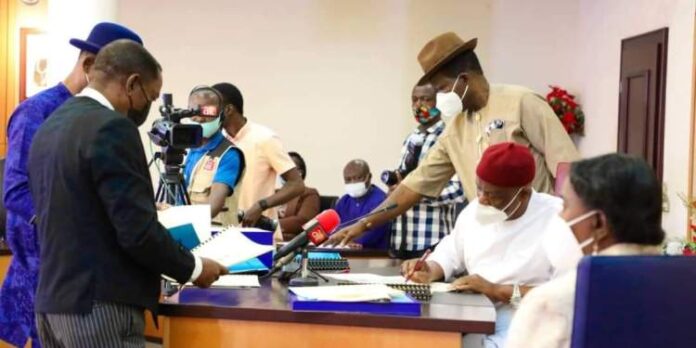 He has maintained that the judgement of the Federal High Court sitting in Port Harcourt had sufficiently addressed the illegality perpetrated by the Federal Inland Revenue Services (FIRS) on behalf of the Federal Government in the collection of VAT in States.

The governor stated this at the Government House, Port Harcourt, shortly after signing into law on Thursday, the Valued Added Tax Law No. 4 of 2021; The Open Rearing and Grazing Prohibition Law No 5 of 2021; The Child’s Rights Amendment Law No 2 of 2021; The Residents Registration Agency Law No 6 of 2021 and the Naming and Renaming of Infrastructure Law No3 of 2021.

The signed bills were recently passed by the Rivers State House of Assembly.

The Rivers State Governor pointed out that when agencies of the Federal Government are allowed to illegally demand and collect taxes meant for states to collect, they strangulate the States financially and turn them to be beggars.

“But we (Rivers State) are standing on the part of history as representatives of the state to have taken the bull by the horn to challenge the illegality of the of the Federal Government through the Federal inland Revenue Services (FIRS).

“Of course, we are all aware that the states have already been strangulated. Most states depend on allocation from federation account. States have been turned to beggars. Hardly will any day pass that you won’t see one state or the other going to Abuja to beg for one fund or the other.”

The governor said no campaign of calumny or blackmail on the part of FIRS will make what is illegal to become legal. He dismissed FIRS’ propaganda that 30 states will suffer if some states are allowed to collect VAT.

Governor Wike pointed out that the concerns should be on establishing whose duty is it to collect VAT and the constitutionality of such position before talking about who is going to suffer or not.

“In this (Rivers) state, we awarded contract to companies and within the last month we paid over N30billion to the contractors and 7.5% will now be deducted from that and to be given to FIRS.

“Now, look at 7.5% of N30billion of contracts we awarded to companies in Rivers State, you will be talking about almost N3billion only from that source. Now, at the end of the month, Rivers State government has never received more than N2billion from VAT. So, I have contributed more through the award of contract and you are giving me less. What’s the justification for it.”

Speaking further, Governor Wike said there are plans already for FIRS to introduce Road Tax and this is likely to take away more duties from the States, and further emasculating them financially.

The governor remarked that the State have been so emasculated that they could barely survive without monthly revenue received from Federation Accounts Allocation Committee (FAAC).

Governor Wike stressed that the over bearing attitude of the Federal Government, impinges on attaining financial autonomy for the legislature and the judiciary, since the States are not allowed to collect due revenues as specified by the country’s constitution.

According to Governor Wike, with the Petroleum Industry Act (PIA) passed and signed into law, there shall be unbundling of NNPC, which means that NNPC remittance to the federation account will be less, requiring every state to look inwards on how to survive.

Governor Wike, while thanking the state lawmakers for their courage to have given the bill speedy passage, assured that every area that the law allows the state to collect revenue will be maximised for the survival of the state.

Speaking on the Open Rearing and Grazing Prohibition law, No.5 of 2021, Governor Wike said it is inimical to development and peace, for any state to condone opening grazing of cattle.

Governor Wike said cattle rearing is agricultural business and the law, which has specified ranching, is so intended in order to stem clash between herdsmen who go to destroy farmland, crops, and having problems with farmers that lead to fighting and killing of themselves.

On the Child’s Rights Amendment Law No 2 of 2021, Governor Wike noted that with such law in place now, family courts can become operational in the State.

Governor Wike said the Naming and Renaming of Infrastructure Law No3 of 2021 will promote the naming of public facilities after prominent Rivers people.

The governor also said that with the Residents Registration Agency Law No 6 of 2021, every resident in the State will be registered so that the State Government can know their status, what they do and where they reside for purposes of security planning.

On his part, the Speaker of the Rivers State House of Assembly, Rt. Hon. Ikuinyi-Owaji Ibani said, described the collection of VAT by FIRS as the worst form of retrogressive tax in any tax regime.

He commended the governor and the state government for challenging the constitutionality of FIRS collection of VAT in States. According to him, the signing of the VAT law will ensure that Rivers’ people are not plunged into extreme poverty.

“I am tempered to believe that Nigeria, the world over, is the only country professing federalism but with a unitary constitution. Which is the very opposite of what federalism stands for.”

Speaking further, he said the law banning open grazing in Rivers State will serve as both cure to the symptom and the disease of herders and farmer bloody conflict.

He said lawmakers will continue to partner the executive in providing requisite laws that will advance the state for the good of posterity.

Leader of the Rivers State House of Assembly, Hon Martin Amaewhule said lawmakers delineated and gave speedy passage to the bills because of their relevance to the socioeconomic progress of the State.