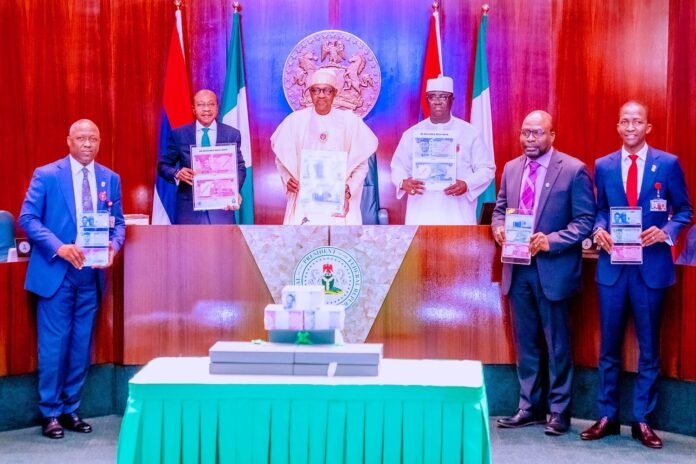 Speaking at the inauguration of the new banknotes, which preceded the Federal Executive Council, FEC, meeting in Abuja yesterday, Buhari explained in detail the basis for his approval to the Central Bank of Nigeria, CBN, to redesign the N200, N500 and N1000 banknotes.

According to him, the new Naira banknotes have been fortified with security features that make them difficult to counterfeit.

He added that the new banknotes would help CBN to design and implement better monetary policy objectives, as well as enrich the collective memory of Nigeria’s heritage.
Buhari, who commended the CBN Governor Godwin Emefiele and his deputies for the initiative, also thanked the Managing Director, Mr. Ahmed Halilu, Executive Directors and staff of NSPM PLC “for working tirelessly with the apex bank to make the currency redesign a reality, and for printing the new Naira notes within a comparatively short time.”

He noted that it was now almost 20 years since the last major redesign of the country’s local currency was done, adding that implied that the Naira was long overdue for a redesign.
The President said: ”A cycle of banknote redesign is generally aimed at achieving specific objectives, including, but not limited to improving security of banknotes.

”It is also aimed at mitigating counterfeiting, preserving the collective national heritage, controlling currency in circulation, and reducing the overall cost of currency management.

‘‘As is known, our local laws, specifically the Central Bank of Nigeria Act of 2007, grants the CBN the power to issue and redesign the Naira.

“In line with this power, the bank’s governor approached me earlier in this year to seek my permission to embark on a currency redesign project. I considered all the facts and reasons presented before me by the CBN.”

He expressed the hope that the new notes would address the urgent need to take control of currency in circulation, adding that it would also address the menace of hoarding Naira banknotes outside the banking system and curb the shortage of clean and fit banknotes in circulation.

Buhari said the redesigned notes would equally address the increase in counterfeiting of high-denomination Naira banknotes.

“While this may not be apparent to many Nigerians, only four out of the 54 African countries print their currencies in their countries, and Nigeria is one, hence a majority of African countries print their currencies abroad and import them the way we import other goods.
“That is why it is with immense pride that I announce to you that these redesigned currencies are locally produced right here in Nigeria by NSPM Plc,’’ he said.

Currency ought to be redesigned, re-issued by 5-8 yrs – EMEFIELE

In his remarks, Emefiele explained that in line with global practice, the naira was supposed to be redesigned and re-issued between five and eight years.
He regretted that in Nigeria, the naira had not been redesigned for about 19 years now because of lack of political will from the previous leaders.

He said: “In the past, I have to confess that attempts by the CBN to redesign and reissue the naira notes have been resisred. It is only President Muhammadu Buhari that has the courage to do so.”

Emefiele said it was the mandate of the CBN to redesign and reissue the notes, assuring that henceforth, the exercise would take place after five to eight years.
“After today, the CBN will begin to redesign and re-issue the naira for every five to eight years,” he said.
The CBN governor said Nigeria had gone cashless and that security agencies would monitor people making withdrawal at the counter to know how much withdrawn and also monitor the usage of the money.

He said there was no need to insinuate that the policy was targeted at anyone, adding that the CBN was determined to ensure that the provision of the law on volume of money one should carry was followed.

For those calling for extension of time for the usage of the old notes, the CBN boss said: “We will not go with people that want extension of time. From today, this currency that was re-issued will become a legal tender.”

He said there was no local government area in the country where there was no bank agent, adding that there was over one million point across the country that people could go and deposit the old notes.
He also assured that the new notes could not be counterfeited because of the features in them.

Distribution to CBN branches begins today, Currency Operations Director says
Also speaking on the issue yesterday, the Director of Currency Operations, Mr. Bello Umar, said: “From Thursday, that is tomorrow (today), we will start distribution to CBN branches across the country, so that whenever we are set to launch, maybe at a later date, we already have the notes across the country.”
The new notes are expected to be in circulation as from December 15, and will circulate side-by-side with the old notes until January, 31 2023, when the latter would cease to be legal tender. Mr. Umar, said, however, that the apex bank was concerned that the rush to deposit old notes had not yet been seen, as anticipated.
He revealed that as of Friday, last week, only N165 billion had been deposited by banks with the CBN, adding that even some of the banks with high customer-base records had not made any deposit.

Under the policy, the CBN expects to mop up about N2.7 trillion held outside the banking system, out of the N3.2 trillion in circulation.
Umar said: “When we designed this policy, there was about N2.7 trillion outside the banking system, out of the N3.2 trillion in circulation. As at Friday, November 18, the total deposit we have received from the banks was N165 billion, which is still small.
“We are not seeing the rush. Some banks have not even made any deposits and some of them are banks with large customer-base. In fact, the Director, Banking Supervision had to bring it to the notice of the Inter-Agency Committee, yesterday.
“It is a problem for us and we are hoping that it does not result in a stampede when we are getting close to the end of January.”
The director said the CBN had extended its work days to Saturday and that the bank’s branches were opened to receive deposits from banks.
He said the apex bank had also waived charges and removed all limits in terms of the amount of money a customer could deposit in his account, adding that there was no reason for anyone to be afraid to deposit their monies in their accounts.
‘There’ll be no deadline extension’
He warned that the January 31, 2023, deadline was sacrosanct and that members of the public should make sure they returned the three denominations (N200, N500 and N1, 000) before January 31, 2023, as all monies held in those denominations would cease to be legal tender after that day.

Network facilities, 1.4 m agents to assist rural dwellers
In his remarks, the Director of Corporate Communications, Mr. Osita Nwani-sobi, assured that centres would be created for rural, unbanked members of the public to change their old notes.
He added that the Shared Agent Network Expansion Facilities, SANEF, had over 1.4 million agents across Nigeria to address that concern, ”such that even where people don’t have bank accounts, they will still be able to change their money and we are going to be doing that within the next few days.
“The CBN is very mindful and has said that we will do whatever needs to be done to enable people change whatever money they have.”