Why Chief Ayiri was suspended as Ologbotsere – Warri Ruling House 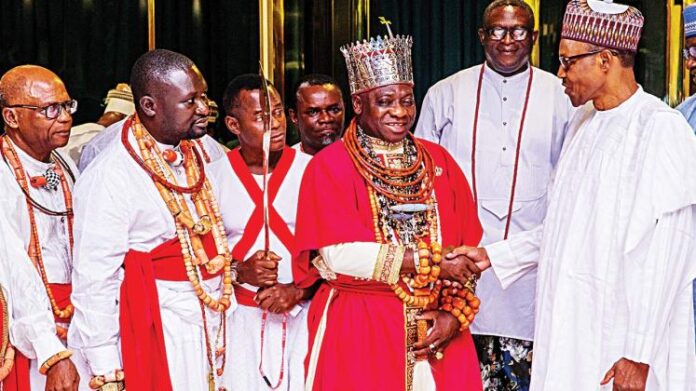 As the process to select a new Olu of Warri continues to gather momentum, the Ginuwa 1 Ruling House has suspended the Prime Minister (Ologbotsere) of Warri, Chief Ayiri Emami, following heightened succession battle for the revered Itsekiri throne.

It was gathered that there has been disquiet in the Itsekiri Nation since His Majesty, Ogiame Ikenwoli, reportedly joined his ancestors in December last year.

Although the demise of the Itsekiri monarch has not been officially announced, it was gathered that process to pick his successor had since commenced among members of the Ruling House.

The battle to select a consensus candidate for the throne heightened on Monday following reports that the choice of the Ruling House, Prince Tsola Emiko, was reportedly disqualified by the Chief Ayiri-led Olu’s Advisory Council.

Prince Tsola is the first son of the late 19th Olu of Warri, Ogiame Atuwatse ll.

However, the Regent of Warri, Emmanuel Okotie-Eboh, who was appointed following the demise of the monarch, on Tuesday flanked by members of the Ginuwa 1 Ruing House announced that Chief Ayiri has been suspended from the Council of Chiefs with immediate effect.

In Ayiri’s place, the Regent, announced the Iyatsere, who is second in command in the kingdom to immediately assume the position of Ologbotsere in acting capacity and also lead the final process for the selection of Olu of Warri.

Announcing the suspension of the Ologbotsere in the presence of Itsekiri Ruling Houses in Warri, the Regent accused Chief Ayiri and others of illegally disqualifying the choice of the Ruling House among other allegations.