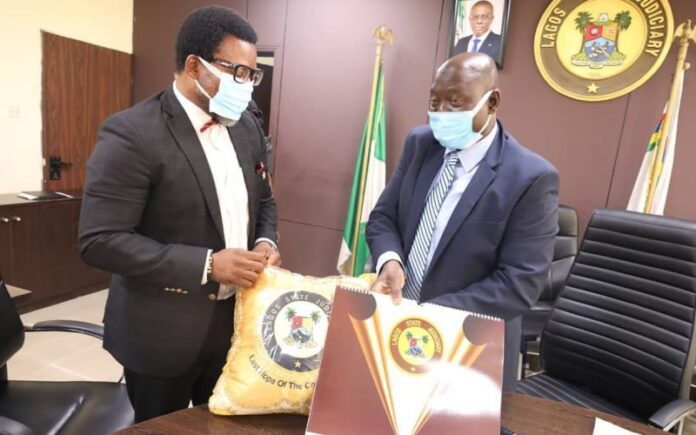 The Lagos State Judiciary has pledged its support to the Lagos State Protection Agency (LASCOPA) in ensuring that the rights of consumers across the State are well protected with relevant legal backing.

The Chief Judge of Lagos State, Justice Kazeem Alogba, gave the pledge on Monday, while welcoming the management of LASCOPA, led by its General Manager, Mr. Afolabi Solebo, to his office in Ikeja.

Justice Alogba commended the Agency for its efforts so far in bringing succour to many homes and advised that the agency be more deliberate in its advocacy and publicity plans in order to get the populace aware of its various activities.

While noting that there are a lot of citizens who are not aware of their rights and many who had fallen victims to substandard products in the past, he implored the delegation to strengthen the intelligence team of the agency to be more proactive in the discharge of their duties, describing them as the foot soldiers.

Alogba pledged that the Judiciary would ensure that cases bordering on consumer protection will be assigned to specific courts to expedite action on matters of consumer rights and reduce the burden of lengthy trials in courts.

“Once the procedural team of the agency is up and doing, the judiciary is ready to give its support. We have observed that cases are stalled in courts most times because there are no witnesses in courts or evidence provided are inadequate to be able to get judgments; but once everything is in order there’s no reason to delay such matters because cases are filed-in every day and we on our part, cannot be seen not to be doing the needful”, the Chief Judge said.

Earlier, the General Manager of LASCOPA, Barrister Afolabi Solebo, requested that the Judiciary assist the Agency with designated courts wherein erring cases relating to consumer protection can be prosecuted.

Solebo noted that several cases were pending in courts before the pandemic which couldn’t see the light of day and as such the agency resulted in mediation and reconciliation to get some of the cases settled.

He, therefore, solicited the support of the Chief Judge to help wade into other cases that mediation and reconciliation can not resolve.