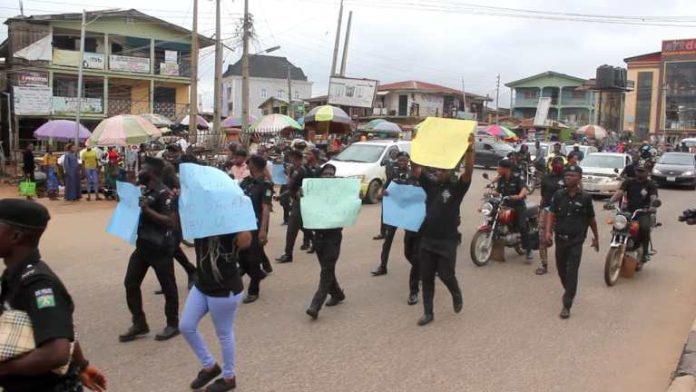 Some police special constabularies on Wednesday stormed the streets of Osogbo, Osun State capital to protest non-payment of their stipends for eighteen months.

The police constabularies, numbering about 500, gathered at Oke-Fia roundabout in the morning, moved through Alekunwodo to Olaiya junction to register their displeasure over the unpaid allowances.

The protesters who wore their police uniform were armed with placards with different inscriptions such as, “Pay Us Now”, “We’re Dying”, “We’re Hungry,” among others.

Addressing journalists, one of the protesters said, “we’re dying. We spent so much at the College. I have children but it’s 18 months now since I have not been paid. Four of us have been killed by armed robbers during attacks on backs in Ikire, Iragbiji and others. We want our money.”

Meanwhile, a mild drama ensued when the Osun State Commissioner of Police, Olawale Olokode tried to calm the protesters who looked so determined to press home their demands.

They ignored entreaties by the CP to desist from demonstrating openly and continued to call on the Inspector General of Police, Usman Baba, Olokode and other top echelon of the Force to work towards the payment of their entitlements.

The youths recruited as Constabularies into the Nigeria Police Force to complement the police in maintaining security in Osun State sing government has refused to pay their salaries since the completion of their training in May 2021.

Some of the protesters rode on motorcycles carrying three passengers each while others who dressed in black Police Uniform armed themselves with placards.

The aggrieved police Constabularies lamented that commercial tricycle and motorcycle operators in the state now have amorous relationship with their wives due to their inability to take care of their wives and children.

Also speaking with newsmen, Constable Tijani Adewale who expressed his grief said despite the fact that they have not been paid, they were really committed to duties saying no few than three Constabularies have lost their lives in the course of discharging their duties.

According to him, “We have gone to the local government, honourables and dignitaries and yet nothing has been done.

“We lost three persons in Ikire and one in Iree. These people died in the course of discharging their duty. We are very dutiful despite the fact that we have not been paid a dime. Due to unpaid allowances, tricycle and Okada riders have snatched our wives because of inability to take care of them.”

When he was eventually allowed to address the protesters, Olokode ordered them to stop the protest with immediate effect just as he assured them that the authority in charge would see to their compliant.

“As far as you are wearing this uniform, we expect you to maintain high discipline as force men,” he said.

Meanwhile, the Area Command, ACP Kayode Ayilara who had earlier arrived the scene to maintain order, also urged the constabularies to suspend the protest saying it was embarrassing and uncalled for seeing them protesting in force uniform.

Ayilara said the protesting Constabularies ought to have channeled their grievances to the appropriate quarters instead of disturbing the public peace.