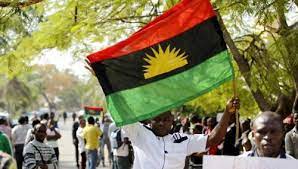 The Nnamdi Kanu-led Indigenous People of Biafra, IPOB, has announced the closure of its bank account domiciled in the United States of America.

A statement signed by Chika Edoziem, IPOB’s Head of Directorate, said that the account served as a “worldwide” platform for members of the secessionist organisation to pay their monthly contributions.

Edoziem said the group decided to shut down the account after it received a report from the bank that some “yet to be identified persons” accused it of fraudulently operating the account.

According to him, another account has been opened to serve the same purpose.

“That the leader of the Indigenous People of Biafra worldwide, Nnamdi Kanu, authorised the opening of the IPOB USA, families were instructed to pay in their monthly contributions,” the statement reads.

“That this same USA national account was also designated by our leader as the account for ESN (Eastern Security Network) worldwide contributions.

“Following a report to the bank by yet-to-be identified persons that this account is fraudulent, the bank requested that the account be closed.”

Nnamdi Kanu, the supreme leader of the secessionist organisation was recently arrested in Kenya, East Africa, and repatriated to Nigeria for the continuation of his trial.

He was said to have jumped bail in 2017 after security operatives invaded his Afaraukwu home in Umuahia, Abia State, after he was granted bail by the Federal High Court, Abuja.