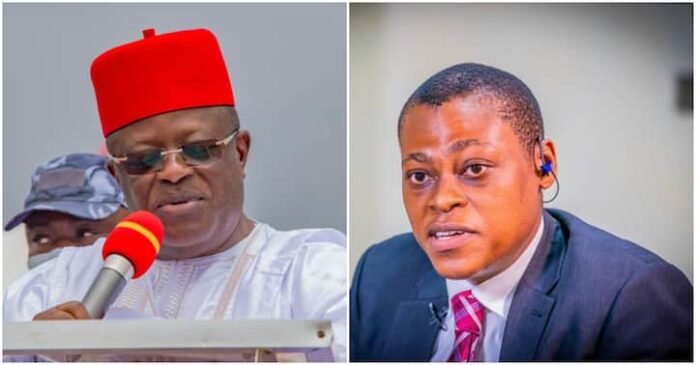 Governor Dave Umahi of Ebonyi state, on Friday, September 2nd, mocked Arise Television presenter, Oseni Rufai during an interview programme. Recall that in August 2022, the popular TV anchor has a face-off with Lagos police, for violating the traffic law in the state.

Rufai who was accused of driving on the BRT lane on Lagos highway and also resisting arrest by policemen, however, appeared in a Lagos mobile court and was accused of contravening Lagos State Transport Law of 2018.

The court found him guilty of driving on the BRT lane in contravention of the law and was fined the sum of N70,000 and after he made the payment, his vehicle was released to him.

The southeast governor when he appeared on Arise TV morning programme which Rufai co-anchored and was asked to defend the ruling All Progressives Congress (APC)’s Muslim -Muslim Ticket, replied by mocking the ace journalist.

Rufai had asked Umahi to respond to the question from a Christian perspective and the Ebonyi governor replied thus.

“Rufai, I think I have answered this question and I wouldn’t want to go back. And I don’t know whether the fact that you broke the law of driving against traffic is the problem.

He jokingly added: “I have never commented about that, you’ve not apologized to me. But let me say I have answered this question, and I don’t want to go back to it, Rufai.

Co-host of the popular ARISE TV breakfast program “The Morning Show”, Rufai Oseni has tendered a public apology to the Lagos state police command over the heated brawl that transpired between both parties recently.