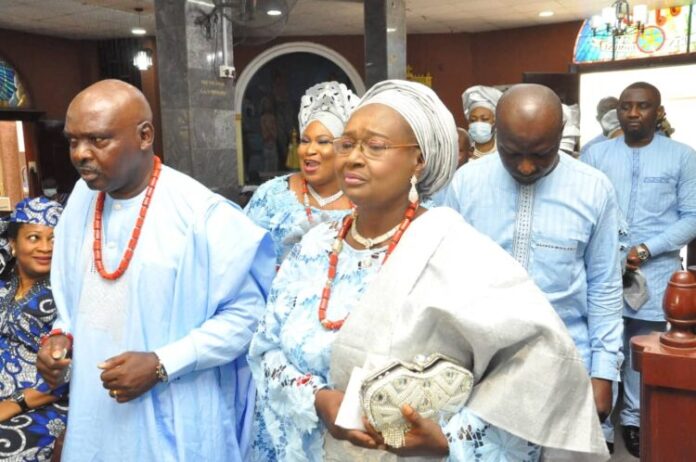 Eminent personalities from all walks of life, on Friday 22nd October, 2021, converged in Lagos, for the burial ceremony of Mrs. Joanna Tokunbo, the grandmother of Abiodun Coker, a journalist, public relations expert and core member of the media relations department of United Bank for Africa (UBA).

The three days event kicked off with a Christian Wake Keep on Tuesday, 19th of October, Service of Songs on Wednesday, October 20 which was followed by a requiem mass and interment on Friday 23rd at Ikoyi Cemetery.

The memorable Requiem Mass was held at St. Michael’s Catholic Church, Lafiaji on Friday, October 22, and was attended by family and friends of the deceased who came out in their numbers to pay their last respect.

The event climaxed with an elaborate shindig which saw guests being entertained at NAF Base, Kofo Abayomi Street, Victoria Island, Lagos.

In his tribute, Coker extolled the virtues of his late grand mum, describing her as compassionate and an epitome of love that cared for all. He said Mama’s humility and selfless service to God and humanity were second to none.

According to him: “My special Grandmother, may you rest in the bosom of the lord till we see to part no more.

“These words felt like a dagger to the chest, knowing that you are gone. But I know you will never be forgotten. I know for a fact that I will never forget you and how much you’ve impacted my life. Not only that, but also the lives of every single person you came across. I know for a fact that you touched many lives. Little wonder you were adored so much and I know that they will all miss you to bits.

“You truly were a special, special woman! You may have passed on, but your memories are etched in my heart. In there you will always live on.

“As I write this piece, I do it with a lot of struggle. Losing you on that 23rd of September brought a pain that cut so deep! Thank you for your sacrifices, your care and concern, your love, compassion and everything that you have done for me. Wherever you are. I look back to when I was so little when you put me on your back to pound Jero while mum was at work and also attended to the neighbours who depended on you for so much because they were not lettered.

“You worked so hard and multi-tasked, doing so much at once yet perfectly, helping others. You were more like a rallying point for all the neighbours who all came to you for help, support and guidance. I guess it’s from you and Papa that my Mum and we the children learnt how to be passionate and dedicated to any course we embarked upon. You loved your children, grandchildren, and great grandchildren unconditionally. You were truly an epitome of love and taught us all how to effortlessly stand by others genuinely and selflessly. l am proud to have had you as my grandmother. Mama General, I will miss you sorely! I know it is important to be strong for others so as to advance your wonderful legacy.

“When I summoned up the courage to tell Fadekemi about your passing, after she asked about you repeatedly, I was shocked when she hugged me and said, I know my great grandma is resting in Heaven and GOD will look after her. Without a doubt, I know an angel spoke through her and I am certain that indeed you accomplished all that God sent you here to do and he has called you to be with Him.

“I am consoled by the fact that you are in a much better place!

“Love you Mama General. You truly were a treasure to all of us,” He penned.