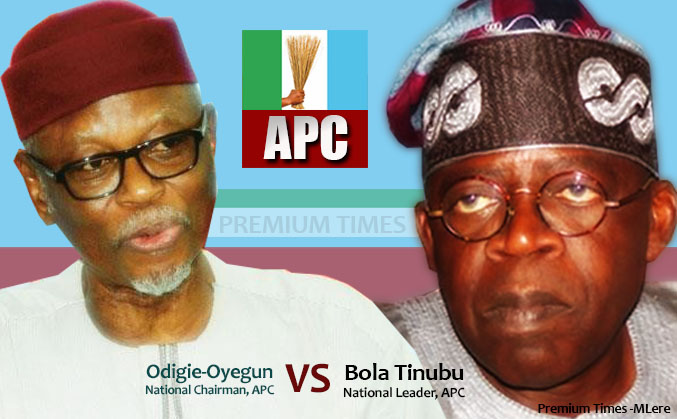 There is anxiety in the political camp of a presidential aspirant on the platform of the All Progressives Congress, Bola Tinubu, as Chief John Odigie-Oyegun heads the presidential screening panel of the party.

Odigie-Oyegun, the first substantive national chairman of the party, is believed to be a political enemy of the APC National Leader since the 2020 Edo State governorship election.

He is the chairman of the seven-man panel to screen the APC presidential aspirants today in Abuja ahead of the party’s convention.

During the Edo governorship election, Pastor Ize-Iyamu, who was backed by Tinubu, was defeated by the incumbent governor, Godwin Obaseki, despite defecting to the Peoples Democratic Party.

Politicians in the Tinubu camp argued that Oyegun engaged in anti-party activities to ensure the victory of Obaseki.

They expressed fear that Oyegun might back a “weaker” candidate for the PDP to return to power again.

“There is fear and anxiety among the aspirants and the various camps because Chief Oyegun has become a controversial and polarising figure in the party.

“He was among those who plotted against the removal of Adams Oshiomhole and sacking of the immediate past NWC. He supported Obaseki in an election where the APC had a governorship candidate in Edo State. The issue has become if Chief Oyegun will be impartial,” one of the leaders of the Tinubu support group said.

Another Tinubu supporter said, “Why Oyegun of all people? How can he be a neutral party in this case? We all know the role played by Tinubu in Oyegun’s removal and what Oyegun also did in the last Edo election. I hope he won’t be biased.”