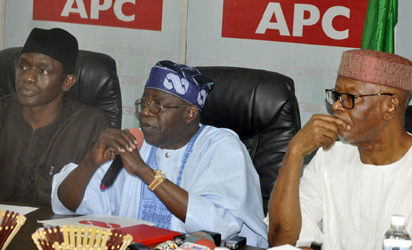 The All-Progressives Congress Presidential Campaign Council is planning an alliance with smaller parties in a bid to boost the chances of its presidential candidate, Asiwaju Bola Tinubu ahead of the February 25 presidential election.

According to information gathered, the PCC and the party had been making overtures to the parties to adopt Tinubu as their standard bearer.

Findings indicated the APC governors and Tinubu met on Monday night following fears expressed by some members on the need to address inadequacies in the party’s presidential campaign.

It was learnt that APC Presidential Campaign Council, comprising governors and the candidate, was of the view that the alliance with other parties would assist the party in getting the highest number of votes and the required national spread in the presidential poll.

A member of the APC Presidential Campaign Council, Senator Adesoji Akanbi confirmed to The PUNCH on Tuesday that the APC was looking beyond the Peoples Democratic Party, New Nigeria Peoples Party and the Labour Party, noting that deals could be reached with the smaller parties to adopt Tinubu.

But despite holding several meetings with them, the PDP governors have failed to endorse the ex-Lagos State governor amid the threat of sanctions by their party.

Also, the apathy exhibited by many APC chieftains, former presidential aspirants and ministers to Tinubu’s ambition which was reflected in their refusal to participate in his campaigns, is also reportedly causing apprehension in the ruling party.

But in a move to rejig his campaigns and bolster his prospect, the presidential candidate held a meeting with some APC governors in Abuja on Tuesday.

Speaking about their plan to prevail on several parties to adopt the APC standard bearer, Akanbi, a member of the Election Planning and Monitoring Committee of the APC-PPC and its coordinator in the South-West, said the negotiations were already ongoing in Oyo State, urging APC leaders in other states to adopt the strategy.

The former lawmaker, who is also the Chairman, Strategy and Policy, Tinubu-Shettima Independent Campaign Council said, “We are reaching out to Accord (Party) members, Social Democratic Party and other political parties to vote for Bola Ahmed Tinubu at the presidential election.”

“Seeking defectors (to the APC) is too late now; that will not work, that is like time-wasting. That can happen voluntarily. What we are selling to them is the product – Bola Ahmed Tinubu – for president.

“They should come out and support him for this reason and that reason so that they can have a president that can deliver.’’

“We are encouraging all our members and stakeholders in other states to take that approach and I am sure they are doing it. It was my personal idea from Day One, immediately after the primaries and I have sold the idea to the party generally and most states are adopting it. Politics is local,’’ he concluded.

A spokesman for the PCC and Minister of Labour and Employment, Fetus Keyamo when contacted said, “it’s a welcome development. In politics,  you need as many people as you can get. As many political parties and candidates that have seen the light and are ready to team up with Asiwaju, we welcome them on board. It is an extremely welcome development.”

The factional National Publicity Secretary of the SDP, Alpha Mohammed, disclosed that the party would welcome an alliance with the APC.

Mohammed said the SDP had done an assessment and discovered that the presidential candidate of the APC is the best.

He said, “Soon, our party is considering an alliance with Tinubu because we have found him to be the most successful candidate. Look at all the revelations he did in the Chatham House meeting; he built a modern state that is capable of standing as a country of its own. Nobody has contradicted that. We all know what he had done in Lagos.

Explaining why his faction may not support the SDP presidential candidate, Mohammed added, “Where we find an SDP candidate who is promising, we will support him. But when we see that the candidate is just there for election purposes, please don’t waste your political capital on such a person.

“Of course, we are promoting Tinubu. You know SDP is factionalised. I told you, as a faction, it is incumbent on us to look around and see which of the candidates will move Nigeria further than the other.

“If the SDP presidential candidate from the other side is the best, of course, we will support him. In some states, we have supported other people who are SDP and they have won. For instance in Niger State, we won a local government and the person did not contest under my own party.”

However, the SDP National Publicity Secretary, Rufus Aiyenigba, denied any deal with the APC or any other political party.

Aiyenigba, who noted that the party’s presidential candidate, Adewole Adebayo, had gone too far to contemplate treading such a path, said the SDP remained the only party with a genuine plan to reposition the country.

“No, it is not true. I am not saying that other parties cannot do it but not the SDP. As we speak, our candidate is going for the election and we are mobilising across the nation. As we speak, he is in Kano. Tomorrow (today), our team will be in Bayelsa and we flag off in Ogun State on Saturday. We are not having any alliance with any party, individual or group.

“No party in the country is passionate about the need to birth a new Nigeria like the SDP. How can a party with the most robust blueprint think of an alliance in which it is not the principal partner? No deal, I repeat,” he said.

The presidential candidate of the African Action Alliance, Omoyele Sowore and National Chairman of the All Progressives Grand Alliance, Chief Victor Oye also ruled out any possibility of working with the APC candidate.

Sowore stated, “No, and I think we’ve made it clear we had the first political alliance in this election cycle with the PRP-Vanguard. We have no ideological similarities with the rogue party you mentioned.”

Also speaking, the National Chairman of the Accord Party, Muhammad Nalado, said there was no negotiation with the APC or any political party at the moment.

He stated, “We cannot doubt them because we are not in APC. But at the moment, we have not discussed or sat with any political party to talk about mergers or alliances or whatever.

‘’Up till now, our presidential candidate is in the pursuit of his goal to be the president of Nigeria and we have already formed our campaign council, and we are going on with our campaign. So, there is no negotiation yet.

‘’I cannot rule out negotiation but at the moment, as l am talking to you, we have never discussed it, in our sitting or with any other political party.”

Meanwhile, the APC standard bearer has met with governors elected on the platform of the party in Abuja.