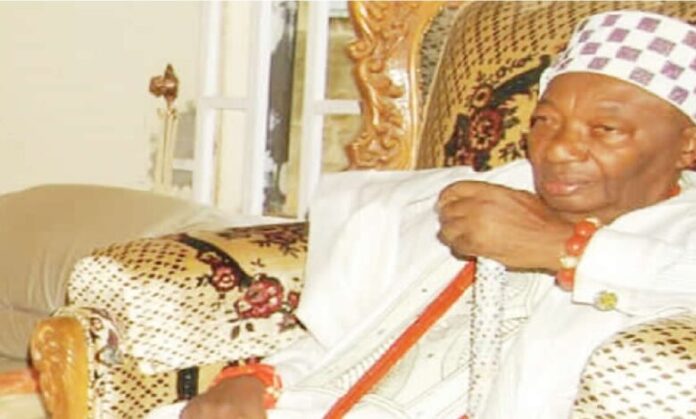 There was palpable tension in Ewu Ekiti community in Ilejemeje Local Government Area of Ekiti Ekiti over the health condition of the Elewu of Ewu Ekiti, Oba Adetutu Ajayi who was attacked by masked gunmen.

The gunmen had attacked the monarch along the Ayetoro Ekiti-Ewu Road by firing at his vehicle and attempting to kill him.

It was gathered that the monarch was traveling in his official car to the neighboring Ayetoro Ekiti, in Ido/Osi Local Government Area when the gunmen struck.

The monarch was said to have sustained gunshot injuries in his legs, arms, and stomach. He has, however, been admitted to one of the hospitals in the state.

Confirming the incident, the Police Public Relations Officer, Ekiti Command, ASP Sunday Abutu, regretted that the incident happened in spite of the rigorous joint patrol, raiding of black spots, and combing of forests by his men to dislodge criminals.

But the community was worried about the health condition of the monarch in which the tension of the area was terse.

The rumoured failing health condition of monarch has been causing serious anxiety in the town.

The police and operatives of the Amotekun Corps have been around and have been patrolling the town in order to calm the tension down.

Meanwhile, a former member of the Ekiti State House of Assembly, Segun Erinle, said calm has returned to the community after the attack on the monarch.

He added that the monarch is responding to treatment and is feeling better after two bullets were extracted from his body.

He said: “The Elewu is responding to treatment. He is feeling better. Bullets have been extracted, we thank God. Two bullets were extracted from Kabiyesi’s body.

“The tension in the community has gone down. We have calmed the people down. The police and operatives of the Amotekun Corps have been around and have been patrolling the town.

“Everything is calm now. Moreover that the Kabiyesi is getting better.

“According to information and what Kabiyesi told me, he was returning from Ayetoro Ekiti to Ewu, where he went to buy something. Many times, he prefers to go himself by way of driving as a form of exercise. On his way back, he said he met the masked criminals at a spot, where the road was bad, and they started shooting.

“So, he stopped and they told him that they would kill him. They took his phones and money, which was about N100,000, and in the process, Kabiyesi just drove off. That was how he managed to escape from them. But they rained bullets on his car as he drove off.

“I still charge the police and other security agencies to try their best to arrest the culprits and as well increase the security outreach in all our towns and villages in the state, especially those of us that are near the border towns.”