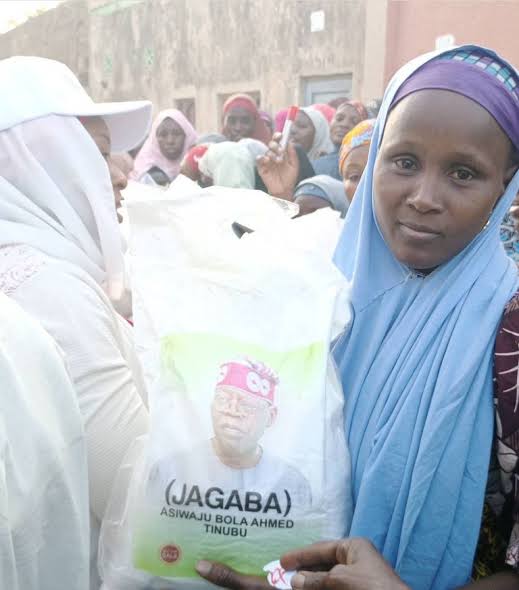 The National leader of the All Progressives Congress (APC) Asiwaju Bola Tinubu, has warned that humanitarian efforts providing needed food to the poor should not be undermined by politicians.

It will be recalled that Naija News reported earlier that loyalists of the national leader of the APC, Bola Tinubu, have started distributing branded bags of rice and other food items to residents of Kano State.

Residents of Kano were seen in videos and photos carrying bags of rice with the inscription ‘JAGABA – Asiwaju Bola Ahmed Tinubu’.

This is coming amid the claim that the former governor of Lagos State has presidential ambition ahead of the 2023 general elections.

In reaction to the distribution of rice bearing his name through a statement on Sunday by his media aide, Tunde Rahman, Tinubu said he had to issue the warning for fear that some malevolent elements may try to undermine and destroy the noble humanitarian effort because of their political opposition to him or simply because they have no love for their fellow man.

He said: “If these actors want to fight Asiwaju, so be it. But they should have the minimal decency to leave poor people alone and not to disturb or disrupt attempts to alleviate the hardships of the hungry and struggling among us.”

While maintaining that he is not behind the distribution of the rice, the APC stalwart lauded various volunteer groups responsible for the “benign act of charity” and love for one another.

Tinubu, however, warned that the volunteer groups should get the items from trusted and reliable suppliers while those who are receiving the rice and other items being distributed should only take such things from people they know and trust.

“Sadly, just as we have true humanitarians among us, our society also has many who hate others and who would try to wreck the noble humanitarian of others,” the statement added.