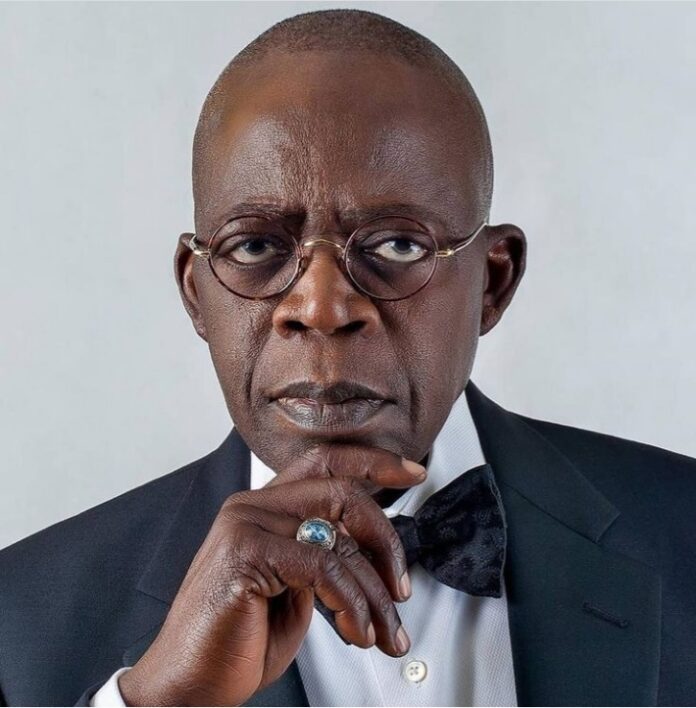 Former Governor of Lagos State, Asiwaju Bola Ahmed Tinubu is the main story as to who could be President in 2023. Though he is yet to declare for President, the momentum is building quite strongly around his candidacy. There is no better proof of that than when he travelled abroad for knee surgery and then went to his London home to rest.

His London residence became a Mecca of a sort. Everybody, almost everybody that is important in the political space, went on a get-well-soon pilgrimage. The President, Muhammadu Buhari led the long list of well-wishers. He was the first to visit, followed by the Governor of Lagos State, Mr Babajide Sanwo-Olu.

Asiwaju Tinubu has since come back and the tempo is still high as ever. Various groups are being formed to actualize his dream of becoming President. There is Tinubu Support Group (TSG) which for now seems to be the leading vehicle for those supporters who wanted Asiwaju to be President.

Another group, SWAGA, a South-West initiative, is also up and running and was launched recently with a lot of fanfare.

Asiwaju on his own has embarked on different visits across the country which many interpreted as building blocs for his presidential ambition.

Tinubu had always wanted to be President. I think that ambition was nurtured during HOPE ’93 days. He was one of the lieutenants of Basorun M.K.O Abiola who won the 1993 presidential election that was annulled by Gen. Ibrahim Babangida. Tinubu, along with other patriots in NADECO fought against the annulment of ‘June 12’ election and like most people in NADECO at the time, went on exile.

He came back to contest election and he was elected to become two-time governor of Lagos State. Though his politics was mostly played in the South-West region, he went into an alliance with President Buhari and others to form APC. It was based on the understanding that he would take over from Buhari when he finished his term. But the cabal at Aso Rock had other plans.

At the inception of Buhari’s administration, the cabal at the Villa comprised of the Chief of Staff, late Abba Kyari, Ambassador Babagana Kingibe, the brainbox of Kyari, Ismaila Funtua, the then DSS director-general, Lawal Daura and President Buhari’s uncle, Mamman Daura.

Along the line, Babagana Kingibe found himself outside the power loop for being seen to be too ambitious and Daura, the DSS DG was removed by the vice president, Professor Osinbajo when he was acting president in the early days of the government. But other members of the cabal wielded enormous power and they didn’t hide the fact that they did not want Asiwaju to succeed Buhari.

At a time, Asiwaju was sidelined and it was when it dawned on them that they can’t win re-election without his input that they reached out to him and made peace. It was at the Lagos wedding that Bukola Saraki organized that Abba Kyari came and reached out to Asiwaju. Though they made up with him, their desire that they wouldn’t allow him to succeed Buhari did not change.

What to do? It was decided that they should look for an alternative candidate in the South-West. They didn’t want the Vice-president for two reasons. The removal of the DG of DSS was considered an eternal sin and that they couldn’t trust him with the power.

The second reason was that he broke the deadlock for appointing Justice Onnoghen as Chief Justice. Since they don’t trust the vice-president, they decided to look elsewhere. They saw a willing candidate in Dr Kayode Fayemi who was a minister at the time.

The cabal led by late Abba Kyari started grooming him and they were instrumental in his contesting and winning the governorship election of Ekiti State. They were confident that they have caged Tinubu and scuttled his plans to be president.

Then fate intervened. Abba Kyari lost his life due to complication from Covid-19 pandemic. Ismaila Funtua also died. The all powerful Mamman Daura started experiencing health challenge and his power and influence waned. In a twist of fate, the roadblock on the ways to Tinubu presidency disappeared. Tinubu became a beautiful bride again. Perhaps, the most powerful person in government now is Attorney-General, Abubakar Malami because of his closeness to President Buhari but he doesn’t have the political clout to stop a Tinubu train.

The caretaker chairman of APC, Governor Buni is not a Tinubu supporter. Likewise, Governor Abubakar Bagudu and Governor El-Rufai, but most of the other influential governors especially the powerful governor of Kano and Katsina States are very strong Tinubu’s supporters. Tinubu’s influence in the party is real and if there is a primary today in APC as to who should be the presidential candidate of the party, Tinubu would win hands down. His image and influence in the party are huge.

So what could stop Tinubu from becoming president?. Only Tinubu can stop Tinubu. He stands a very good chance of becoming the next president if his health permits him. Though he went for knee surgery which was major, he seems to have recovered really well. If he stays healthy, then the road is almost clear for him.

But some people insist that Tinubu still has some health challenges and this might stop him from running.

Based on health ground, Tinubu might still not run. He may allow himself to be persuaded to shelve his ambition. In other words, he may be convinced to step aside for the general good. It is not impossible. He had done it twice before in the past. After finishing his second term as governor of Lagos State in the 2007, Tinubu wanted to run for Senate in Lagos West. Unfortunately, his choice of Babatunde Raji Fashola who was then his Chief of Staff as his successor led to serious crisis in the party. To assuage feelings, he shelved his ambition to be senator and gave the ticket to Ganiyu Solomon.

When Buhari ran for president in 2015, Tinubu wanted to be Vice-President despite the challenge of Muslim-Muslim ticket. Tinubu felt it could work. Abiola had a Muslim-Muslim ticket with Kingibe and they won convincingly. Tinubu believed they could repeat that feat. His foot soldiers in the South-West disagreed. They felt a Muslim-Muslim ticket would be suicidal and they boldly told Asiwaju at a meeting that was called. They advised him to pick a Christian instead.

If this scenario happens, Asiwaju may have to pick between the Vice-President, Prof. Yemi Osinbajo and the Minister of Works and Housing, Babatunde Raji Fashola. No matter who becomes president, Asiwaju Tinubu would play a major role in determining where the pendulum would swing.

Asiwaju is likely to be president, his health permitting; if not, he would once again become the kingmaker.