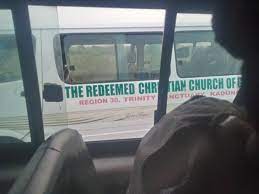 Members of the Redeemed Christian Church of God (RCCG) were kidnapped in Kaduna Friday evening.

The gunmen are suspected to be bandits who have been terrorizing the Northwest region.

The spokesman said the kidnappers were yet to contact the church or the family members.

The captives, from Kaduna Province 1, were reportedly going to Kafanchan for a church activity.

In a Facebook post, an eyewitness, Eje Kenny Faraday, said he narrowly escaped being a victim. He shared the photo of the empty RCCG vehicle.

“All passengers in the bus are just kidnapped along Kachia Road, Km 63 from Kaduna,” he wrote.

The inscription on the bus reads, “The Redeemed Christian Church of God, Region 30, Trinity Sanctuary, Kaduna.”

The actual number of the victims is not known yet. The Police command in Kaduna is expected to provide an update today.